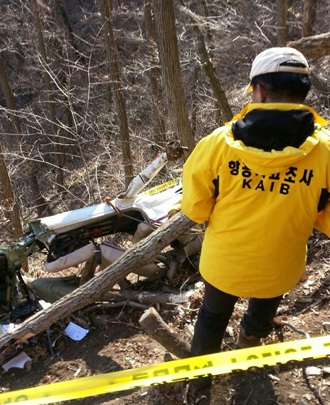 A university’s training aircraft crashed into a wooded area at Mount Chilbo in Yeongdeok, North Gyeongsang, on Tuesday, killing all three people onboard, the North Gyeongsang Provincial Police Agency said.

The three victims - a 28-year-old female flight instructor and two aeronautical science majors at Hanseo University, ages 20 and 23 - were on the Cessna C172S plane as part of a practical training exercise in the regular course of the major. Authorities said it was not immediately clear what caused the crash, which occurred at about 7:40 p.m. on Tuesday.

This is the third time a crash has occurred during a college training session. Two previous accidents claimed four lives. The Cessna C172S took off from the university’s airport in South Chungcheong around 5:50 p.m. and was scheduled to arrive at Uljin Airport in North Gyeongsang at 7:30 p.m.

The last contact with an air traffic control tower at the Uljin Airport took place at 7:37 p.m., with a message reporting that the single-engine plane was on its way to land, according to the police. Control tower officials weren’t able to spot the aircraft on their radar system after 7:40 p.m.

The flight instructor reportedly had 1,500 hours of flying time and was regarded as one of the most distinguished pilots on the faculty. The two students had completed theory-based instruction and one practical training session for daytime flying.

The university said that it has set up a special committee to investigate the cause of the crash and deal with matters relating to compensation.

The Ministry of Land, Infrastructure and Transport has also formed an emergency division to manage the aftermath of the accident. The ministry dispatched aviation experts, fire fighters and police to the site to retrieve the debris and investigate the cause of the crash.