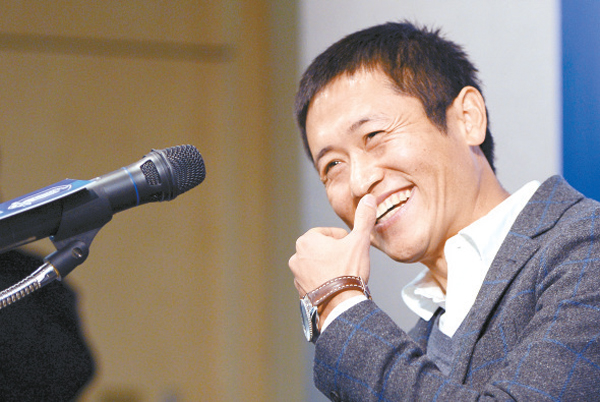 Lee Young-pyo, 36, answers reporters regarding his retirement at the headquarters of the Korea Football Association in Jongno District, central Seoul, yesterday. [NEWSIS]

South Korea full back Lee Young-pyo bid an emotional farewell to football on Thursday, offering an honest yet somewhat harsh self-assessment of a successful career that spanned three continents and took him to the World Cup semifinals in 2002.

Lee won two Dutch titles with PSV Eindhoven before becoming one of the first Koreans to play in the English Premier League, at Tottenham Hotspur, and ended his 13-year career last month with the Vancouver Whitecaps in Canada.

“I am wrapping up my career that was filled with the joy of victory and agony of defeat and would like to bid goodbye,” the 36-year-old Lee told a news conference as he read a prepared statement.

“I also want to apologize to many fans. Korea’s biggest weakness in the 2000s was an unstable defence and I was part of the problem. It may have been not so obvious but there were many games my team lost because of me,” he added.

“If I were to evaluate my overall performance, I would award myself 80 points [out of 100] as a player but 100 as a person who enjoyed and loved football.”

Lee played in three consecutive World Cups from 2002 and finished his international career as the country’s third most-capped player with 127. Only 2002 team mates Hong Myung-bo (135) and former goalkeeper Lee Woon-jae (132) have won more.

While Lee enjoyed playing stints in England, the Netherlands, Saudi Arabia and Canada, he said the highlight of his career was representing his country, including the memorable run to the semifinals on home soil.

Riding a wave of home support and under the expert leadership of Dutchman Guus Hiddink, South Korea beat Portugal, Italy and Spain to become the first Asian side to reach the last four of a World Cup before their progress was halted by Germany.

“Every single match I played with the national flag on my uniform is meaningful. It was when I put my right hand on my left chest that I realized the genuine pleasure of football .?.?. that it is a sport ‘we’ play, not ‘I’.”

Although he declined to give specific details of his future plans, Lee said he hoped to help the development of Korean football with local media reports suggesting he would remain with the Vancouver Whitecaps to improve his administrative skills.

The Korean Football Association will also hold a retirement ceremony “Adieu No. 12” for Lee during South Korea’s friendly match against Switzerland on Friday.

Lee played his final professional match for Vancouver against the Colorado Rapids in the last round of the Major League Soccer regular season on Oct. 27. He joined the MLS club in 2011. Reuters