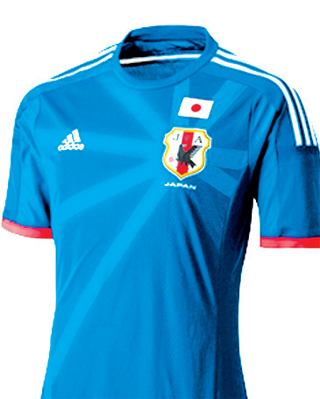 Uniform of Japan designed by Adidas

The new uniform of the Japanese national football team, released on Tuesday, is coming under fire for including a sun-ray pattern that looks like the country’s rising-sun flag, a symbol of the Imperial Japanese Army.

But on the blue field of the uniform, 11 beams radiate out, reminiscent of the rising-sun design.

The Japanese team is planning to wear the new uniform at this Saturday’s friendly match against the Netherlands, and will wear it at the 2014 Brazil World Cup.

The Korean Football Association (KFA) hasn’t commented on the uniform yet, and it looks like they are trying to avoid politicizing the issue, especially in the wake of the 2012 London Olympics. After beating Japan in the bronze medal match, midfielder Park Jong-woo held a banner that read “Dokdo is our land,” referring to the Korean islets that Japan contests.

Japan cried foul over Park’s action, and FIFA and the International Olympic Council launched an investigation while withholding the 24-year-old midfielder’s medal. He eventually received it after the sports governing bodies concluded that his action was not intentional but made in the heat of the moment. Park was banned from playing two A-match games.

Many analysts and fans are saying FIFA should ban the uniform based on the association’s rule No. 57, which forbids “political, religious or commercial messages” on the field.

The Nazi swastika, for instance, is strictly forbidden anywhere in football. But the problem, say experts, is that few people from Western countries know about Japan’s Rising Sun flag and what it represents to Korea and China, which were invaded by Japan.

Japanese football fans sometimes bring those flags to national matches. In the East Asian Cup Match against Korea, which was held at Jamsil Sports Complex on July 28, some Japanese fans held a large rising-sun flag during the game. The KFA at the time complained to the East Asia Football Federations, saying, “The flag is a symbol that hurts Koreans’ historical wounds.”

Lawmakers are currently working with the National Assembly on legislation related to the rising-sun flag. In September, lawmaker Shon In-chun of the ruling Saenuri Party proposed a bill that would impose a maximum fine of 3 million won ($2,800) or up to one year imprisonment for producing or distributing materials symbolizing Japanese imperialism, such as the rising-sun flag. “The bill will likely be approved between February and April next year,” said a spokesman at the Sohn’s office.

“Politicians need to solve the problem diplomatically because most Western people don’t know what the rising-sun flag means,” said a spokesman of the Korean Olympic Committee. “We haven’t seen any government officials trying to explain. They need to work with other countries that were hurt by Japan’s aggressive war.”