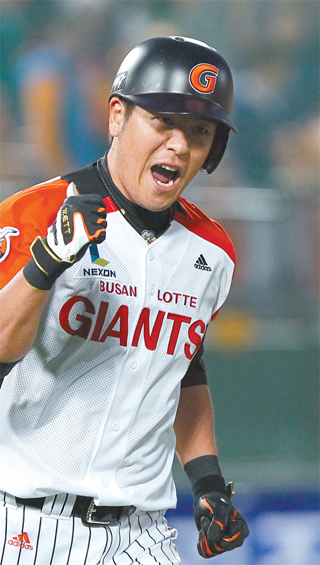 The contract process was like a flash of lightning. The Giants first met Kang on Monday, then had a second meeting on Wednesday afternoon, which is when the megadeal was sealed.

Sources said the Giants had promised that they would make the best offer in KBO history in the first meeting and provided the specific amount in the second meeting, completing the contract in a wink.

“I never thought about leaving Giants,” Kang said after signing the contract. “I truly thank the team for offering me such a great deal though I struggled last season. I will do my best to lead the team to be a contender again, just like we used to do.”

Kang hit only .235, with 11 home runs and 57 RBI, but analysts previously said that he is the No.1 free agent considering his age and position. Kang is the first catcher in KBO history to become a free agent in his 20s and is also free from serving military duty because he was a member of the gold-medal-winning Korean baseball team in the 2008 Beijing Olympics.

There were rumors that the big shoppers in this hot stove season, such as the Hanwha Eagles and LG Twins, would offer 8 billion won, but Kang decided to stay with his current team.

“I think this contract would give huge impact to other free agents,” analyst Lee Yong-chul said. “I think a 1 billion won annual salary is a bit too much for Kang, but the Giants, who have failed to re-sign their star players such as Lee Dae-ho [Orix Buffaloes] and Kim Joo-chan [Kia Tigers] in past offseasons, seem like they were desperate to re-sign with Kang. I think other big-name free agents such as Samsung Lions pitcher Jang Won-sam and SK Wyverns second baseman Jung Keun-woo must be very happy with Kang signing this scale of contract.”

Jung, who is turning 32 next season, had his second meeting with the Wyverns on Wednesday, but it seems like they need more time. “The price is higher than we thought,” said Min Kyung-sam, general manager of the Wyverns. He refused to say how much the price gap is. Before the meeting, Jung said, “I think I deserve the best offer among free agents.”

After Kang’s deal was sealed, analysts predicted that Jung might seek a 7 billion won deal. Jung hit .301, with 1,057 hits and 269 steals in nine seasons with Wyverns. If he can’t secure a new contract with the Incheon-based team by today, he can negotiate with any team. The Hanwha Eagles, who are having a busy time hunting a decent leadoff hitter, will be a potential bidder.

Meanwhile, Buffaloes’ slugger Lee, who became a free agent after two seasons in Japan, notified the team that he won’t be returning. The Buffaloes offered a two-year, 800 million yen ($8.03 million) deal, but Lee declined the offer.

Lee is looking for a new agent and is considering either a Japanese league team or a Major League Baseball team for next season. In his last two seasons with Buffaloes, Lee hit 48 home runs and 192 RBI in 284 games as the team’s cleanup hitter.

“I like the Buffaloes but I wasn’t able to take that offer considering my last two seasons,” Lee said. “I couldn’t see much difference between the offer that I recently received and the one that I had for the last two years.” Lee received 700 million yen, including a 200 million yen signing bonus.