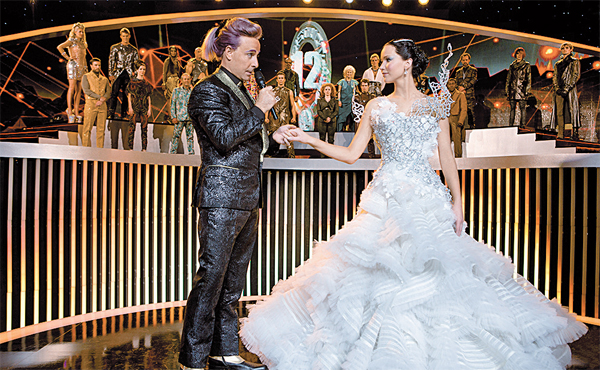 “The Hunger Games” returns with the further adventures of Katniss, played by Jennifer Lawrence, right. Provided by Lotte Entertainment

It can be tough to get a sequel right, matching the first film’s energy while moving the story forward, but the latest “Hunger Games” film, “Hunger Games: Catching Fire,” nails it.

From the opening, you get the sense that something sinister is brewing.

The characters have clearly matured following the life-altering events of the first film when 16-year-old Katniss Everdeen (Jennifer Lawrence) took her sister’s place in the twisted survival game, killing her way to victory.

For the first quarter of the film you get a taste of how much life has changed for the District 12 victors Katniss and Peeta Mellark (Josh Hutcherson).

Their lives are now broadcasted constantly, full of fake smiles, mandatory kisses and the like. But when the cameras stop rolling, Katniss is plagued by nightmares from the Games.

Despite it all, she wants to believe that Gale (Liam Hemsworth) is still the only boy for her and her dreams of eloping with him have only been put on hold.

Katniss is forced to go on a victory tour with Peeta, once more accompanied by unlikely chaperones Haymitch (Woody Harrelson) and Effie (Elizabeth Banks). But just one unscripted moment by a frustrated Katniss is all it takes to ignite another uprising across the districts.

This in turn angers President Snow (Donald Sutherland). To eliminate Katniss and quash the rebellion that she’s brought, Snow decides to hold a special version of the Hunger Games to “celebrate” its 75th anniversary - rather than choosing young people from each of the districts, this time all 24 of the surviving winners from past tournaments will square off against each other.

Katniss’s angst and the over-the-top media fanfare for all things Katniss and Peeta will amuse, as will the training facility with its eclectic mix of oddball champions.

But once the contestants are in the sealed-off dome where the Games take place, with an evil obstacle rolling out one after another each hour, the audience’s hearts will race and adrenalin will rush, just like the original.

This time the players are tougher - or at least freakier.

Amidst the running, hiding and shooting, Katniss has some perplexing questions to answer, some of them pertaining to matters of the heart.