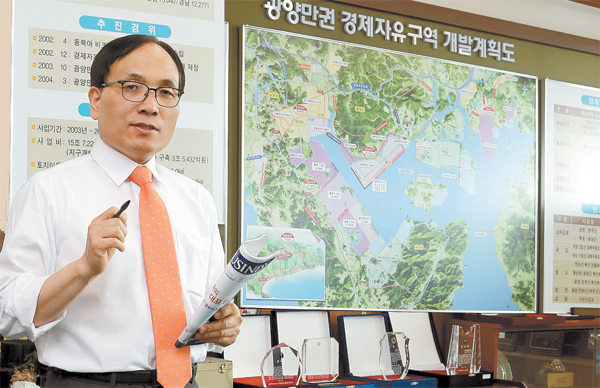 Lee Hee-bong, commissioner of Gwangyang Bay Free Economic Zone Authority, says GFEZ enjoys an ideal location for business. “More than 50 cities of 1 million or more are within a 745-mile radius,” he says. Provided by the GFEZ authority

GWANGYANG, South Jeolla - For many Koreans, Gwangyang Bay is remembered as the place where Admiral Yi Sun-sin, one of the most respected national heroes, died during the Battle of Noryang, the final battle of the Japanese invasion in 1598.

While Yi’s spirit and achievement still remains, Gwangyang Bay is being transformed into one of the nation’s top business hubs by targeting the Northeast Asian market.

Currently, there are eight free economic zones in Korea designed to encourage foreign investment and boost the regional economy, offering tax incentives and eased regulations. Gwangyang Bay Area Free Economic Zone (GFEZ) is one of the oldest - along with Incheon and Busan - designated in October 2003.

For four years in a row, GFEZ has been a runner-up in the free economic zone evaluation by the Ministry of Trade, Industry and Energy. Incheon won first place for three years.

But Lee Hee-bong, commissioner of GFEZ, claims it will be the most competitive zone when development is completed by 2020 due to its ideal location and investment environment. Land prices are a third of those in metropolitan areas like Incheon and Busan.

“If you look at the map, GFEZ is located on a route that can easily connect to Europe and Asia,” Lee said in an interview Wednesday with Korea JoongAng Daily. “More than 50 cities with a poplation of 1 million or more are within a 1,200-kilometer (745-mile) radius.”

According to Lee, about 70 percent of GFEZ land is developed and ready for companies. It is currently developed in five districts and 23 complexes on 84 square kilometers (32.4 square miles) of land.

“Last year, we attracted foreign capital of $1.38 billion,” Lee said. “It is not easy to bring companies here in an global economy slump, but we are steadily moving to achieve our goal.”

So far, 142 companies have decided to set up their production base there, with $12.3 billion invested and 30,000 jobs created. By 2020, GFEZ wants to double foreign direct investment and increase the number of companies in the zone to 400.

“Already in the region, we have Posco’s Gwangyang Steelworks and Yeosu National Industrial Complex, which is home to global petrochemical companies, meaning raw materials like metal and chemical compounds can be supplied easily,” Lee said. “With Gwangyang Port nearby, it is a perfect place from which to export.”

Like other free economic zones, GFEZ offers tax incentives for foreign investment. Furthermore, inside GFEZ, there are two free trade zones, where land can be leased and has different incentives.

Local companies don’t receive tax incentives even if they set up businesses in GFEZ, but because of its good location and business environment, about 100 Korean companies also decided to come here.

“There is even a Korean company that returned from China,” said Lee. “Some say accessibility to the national capital is weak, but we now have the KTX high-speed train and Yeosu Airport. I think it is just a psychological impression that the region is far, but it’s actually not that far.”

But for Lee, who for 27 years has been serving as a government official with expertise in public administration and finance, bringing more foreign investment to the zone is the key to success.

These days, he is busy visiting China and Japan, and Europe and the United States are on his itinerary.

“Because of the close location, companies from China and Japan are paying a lot of attention to coming here, but for next year we will also put our effort on American and European companies,” he said.

Since GFEZ includes parts of Gwangyang, Suncheon, Yeosu - all in South Jeolla - and Hadong County of South Gyeongsang, there were doubts whether they could efficiently work together, especially Jeolla and Gyeongsang provinces.

But Lee said everyone involved in GFEZ is working toward one goal. GFEZ authorities have been reinforcing its workforce by bring special consultants from outside to boost services for international companies.

It currently offers a nonstop service, from investment to consolation to the commencement of business.

Lee, who took the job last year, said his ultimate goal is to make the region a happier place to live and do business. He thinks positive thoughts about the future of the zone, mentioning that name Gwangyang refers to “bright sunshine land.”

“If you look around the region, it is surrounded by beautiful natural resources and delicious foods, so those who come here, they are not actually benefiting only in business. They can experience a good life,” he said.

“I think this project will be my last public service, and I believe we will see the fruit of regional development.”