Posco CEO to resign but denies outside pressure

Posco CEO to resign but denies outside pressure 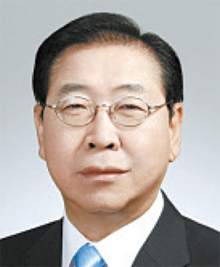 Posco Chairman and CEO Chung Joon-yang abruptly handed in his resignation yesterday amid rumors he was pressured by the government to go.

The chief of the nation’s largest steelmaker yesterday tendered his resignation at a temporary board meeting at Posco Center in Daechi-dong, southern Seoul. Chung’s term was supposed to be extended until March 2015.

“To climb up as the world’s best company and overcome the industry’s limitation in a business environment with infinite competition, Posco needs new leadership,” Chung said in a release.

Chung insisted there was no “external pressure” behind his resignation and didn’t want such rumors harm the company’s image.

Chung, who also heads the World Steel Association, was rumored to be stepping down since September after he reportedly signaled his intention to resign to the Blue House. After the 65-year-old failed to give his resignation last week at a regular board meeting, industry insiders speculated that he would submit it at another board meeting next month and officially step down before a shareholder’s meeting on March 14.

Posco said that the board will soon form a CEO candidate recommendation committee comprised of six outside directors. About 10 candidates have already been mentioned by local media as candidates, including people both inside and outside Posco. The company said it will take some time to select Chung’s replacement.

According to company rules, the committee has to select its candidate at least two weeks before the next meeting of shareholders, who have to approve the appointment.

Chung, who became chairman and CEO of Posco in 2009, was considered a “parachute appointment” by the former Lee Myung-bak administration, and was criticized for the company’s operating profits of 3.6 trillion won ($3.3 billion) last year, barely half the profits of 2011.

Posco was privatized in 2000, although the state-run National Pension Service holds more than 6 percent of its shares. Although the government has no shares in Posco, the CEO of the company has been replaced when the president changes.

KT, which became a private company in 2002, is in a similar situation as Posco. KT Chairman Lee Suk-chae, who was appointed during the Lee Myung-bak administration, also resigned on Tuesday, following an investigation by prosecutors. The government likes to appoint the head of KT.