An ancient land becomes the site of a new city

An ancient land becomes the site of a new city 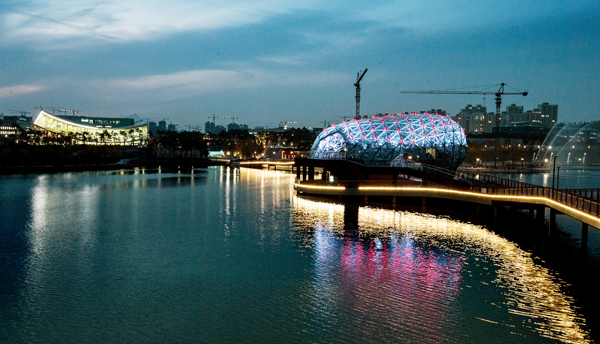 Sejong Lake Park, near the government complex building in the special administrative city of Sejong, is Korea’s largest artificial lake. By Shin Dong-yeun

According to traditional Korean geomancy, a site surrounded by three mountains and two streams is believed to be auspicious.

The special administrative city of Sejong, located in the northeastern part of South Chungcheong, gets that formula just right. Mount Wonsu, Mount Jeonwol and Mount Goehwa stand behind it, like a scenic folding screen, while Miho Stream and the Geum River flow in front of it.

Historically speaking, this isn’t the first time that Sejong was chosen as a capital city. There is a record that King Taejo, the first king of the Joseon Dynasty (1392-1910), when he was looking for a new capital, first chose a site 30 kilometers (19 miles) from the newly created government complex in Sejong (of course, in the end he chose Seoul). Former president Park Chung Hee (1917-1979), the father of President Park Geun-hye, also attempted to move the capital from Seoul to the current location of Sejong.

So perhaps it was fate when Sejong resurfaced as a setting for a Korean government site in 2002, when former president Roo Moo-hyun (1946-2009) revived the idea. In 2005, the Roh administration and National Assembly enacted a law to facilitate such a move. And in 2010, during the Lee Myung-bak administration, the decision was made that 36 government ministries and organizations would call Sejong their new home.

On July 1 of last year, Sejong City was born. Its official name is Sejong Metropolitan Autonomous City. At 465 square kilometers, it is slightly smaller than Seoul’s 605 square kilometers. It is surrounded by the cities of Cheonan and Gongju of South Chungcheong, Cheongwon of North Chungcheong and the city of Daejeon.

Unlike the skyscrapers of Seoul, the four-kilometer-long government complex building in Sejong stretches horizontally like a dragon, bordered by Sejong Lake Park, Korea’s largest artificial lake.

But other than the new building and artificial lake, there are also historical sites and cultural properties here, like the tomb of Joseon official Kim Jong-seo (1383-1453) and a mineral water spring where King Sejong (1397-1450), from whom the city got its name, came to get treatment on his eyes.

Come next month, more government ministries - Health and Welfare; Employment and Labor; Education; and Culture, Sports and Tourism - as well as agencies like the Ministry of Government Legislation and National Tax Service will be moving in.

“As long as Korea doesn’t move its capital somewhere else, there will never be another city like this one,” said Kim Yong-ho of the Multifunctional Administrative Construction Agency, which oversaw the Sejong project.

As the city is finally starting to take shape, it is also investing in tourism. The JoongAng Ilbo traveled to the city and found that there was more to see in Sejong than government buildings and officials.

Sejong can be divided into the Multifunctional Administrative City, where the government complex building and other high-tech urban facilities are being built, and the small and humble Yeongi County, the small town that preceded Sejong. It was like sightseeing two cities at once.

Left: The government complex building is shaped like a dragon. Right: With Mount Wonsu, Mount Jeonwol and Mount Goehwa standing behind it, like a scenic folding screen, and Miho Stream and the Geum River flowing in front of it, Sejong is believed to be an auspicious site in terms of traditional Korean geomancy. By Shin Dong-yeun

The government complex building in Sejong is off-limits to average citizens. The government originally planned to open the rooftop garden to the public, but due to security reasons that plan has not happened yet.

Still, looking at the exterior of the building through the fence was, in itself, quite an exotic experience. At first I was surprised by its size, and then by its form. The building stretches in a curvy line like a dragon. It takes 10 minutes to walk around the entire structure.

The government has vowed to turn more than half of the construction area into green fields. Although our visit took place during the week, there were several people enjoying a picnic at the park.

The park also contains a natural wetland. Filled with reeds and other wild plants, it was a contrast to the Sejong Lake Park, which clearly looks artificial.

We took a bus to visit a nearby village in Hansol-dong called “Cheot Maeul,” or “First Village” in Korean. As the name implies, it is the first residential area created since the construction of the special administrative city began.

People began moving here in late 2011, and currently there are 23,000 residents in the village. As the first, it gives you a real sense of what the residential part of Sejong will eventually look like.

There were two things missing in the village: utility poles and garbage trucks. There are no poles because all the telephone and utility lines have been installed underground. And there are no garbage trucks because garbage disposal is automated: residents put their trash into a box that looks like a mailbox, and it gets taken away underground.

Within the village is a meaningful park: The History Park of the Ancient Tombs of the Baekje Kingdom (18 BC-AD 600). When builders began digging for the construction of the new city, they accidentally came across these Baekje-era tombs, so officials scrapped plans to build a gym there and instead made a park, where people could see the tombs.

“The moment the excavator shovel began digging into the ground, we heard a ‘bam,’?” recalled Kim Gyo-nyeon of the Multifunctional Administrative City Construction Agency. “It hit the top part of a stone tomb. We stopped construction immediately and started an archaeological excavation.”

The tomb has a shape that is different from other tombs of the period, making it historically valuable. If it weren’t for the construction of the special administrative city, the tomb would have remained buried.

From left: The tomb of Kim Jong-seo; History Park of the Ancient Tombs of the Baekje Kingdom; the area near this 650-year-old gingko tree will also be a park; a mineral spring that cured King Sejong of Joseon of his eye problems; Bear Tree Park.

There is another history park in store in Sejong.

Sejong-ni, one of the villages that is located next to the prime minister’s official residence (which is also in the new city), used to be a small, rustic village that 33 households called home. Today, all the households have moved out to make way for the new city. Guarding the empty village is a 650-year-old gingko tree and farmlands where pumpkin and perilla await harvesting.

This village, officials say, will be developed into a history park, with most of its streams, roads and walls slated to keep their original shape.

There are several historical sites that are related to King Sejong, the famous king who invented Hangul, the Korean alphabet. One site is Jeonuichosu, the mineral spring whose water used to be transported all the way to the palace in Seoul. The king drank it for a year, historical records say, and it cured him of an eye disease that he had long suffered from.

Also in Sejong is the tomb of the respected Joseon official Kim Jong-seo (1383-1453). Kim is enjoying a revival of popularity these days thanks to the recent hit film “Face Reader,” which, among other themes, touches on Kim’s loyalty to the king. Kim’s tomb is within eight kilometers of the government complex building.

Daegyo-ri, Janggun-myeon, where the tomb is located, used to be called Handari Maeul, which means “One Leg Village” in Korean. Because Kim was executed, accused of plotting treason, his body could not be buried properly. People in his hometown were able to get just one leg of his corpse for burial.

Still, Kim was one of the most influential figures of his time, and, as was the case with the tombs of most powerful figures in the Joseon era, Kim’s tomb can also be found in a remote place where there is little human traffic. After you go through Hongsal Gate, the entrance to the tomb, you have to walk down a winding path for some time to get to his resting place.

There are other places that make for a nice outing around Sejong.

There is Unju Sanseong, or Unju Fortress, built atop the 459-meter-high (1,506-foot-high) Mount Unju from the Baekje period. It is believed that this is the location that, when the Baekje Kingdom was collapsing, the king and his army put up their last fight. Walking along the fortress is a pleasant experience in a nice weather and the scenery is quite magnificent.

Bear Tree Park is also a great place for family outing. It is more of an arboretum, featuring over 400,000 flowers and trees. But, as the name suggests, you can also see Asiatic black bears and Formosan deer here, too. Once a year, for a few weeks it opens its 2-kilometer path so people can enjoy the autumn foliage. The path which was open until the early part of November, is quite popular.