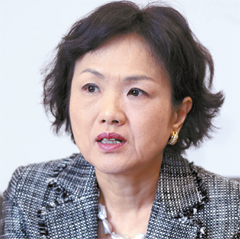 The schism between Korea and Japan is no longer limited to political and historical issues but is now spilling over into the business sector.

Investment made by Japanese companies this year has nose dived compared to the same period last year, from an average monthly investment of $378.5 million in 2012 to $218.1 million in the first nine months of this year.

“Many Japanese conglomerates think nowadays that it’s better to invest in Asean countries rather than Korea,” said Masako Osna, head of the Japan External Trade Organization’s Seoul office. “It’s because of what we call ‘six obstacles.’?”

The six obstacles referred to by Osna include regulations on the environment and labor, heavy taxes, shortages of electricity and staff, and the weak yen.

But added to the roster recently are the worsening relations between the two countries.

“Japanese companies will either maintain their current investment levels or further reduce them,” she said. “Japan will also see no need in striking a bilateral free trade agreement with Korea if it joins the Trans-Pacific Strategic Economic Partnership (TPP).”

Aside from strained ties, the head of the Japanese promotion agency’s Seoul office said revised regulations by the Korean government on toxic chemicals are the top obstacle preventing Japanese companies from entering Korea.

“Chemical companies have to bring in a wide variety of chemicals for research,” Osna said. “However, [Japanese companies] are giving up on their research and development due to the extensive time it takes in passing the government’s screening.” 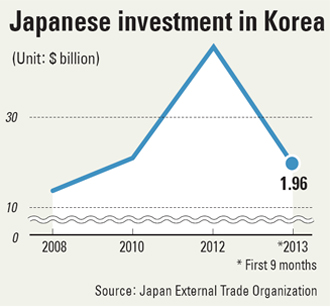 She cited Shin-Etsu Chemical, which conducts research and development on 90 different kinds of chemicals. Osna said it has no intention of supplying its products to Korea.

On labor regulations, Osna criticized the government’s limit on working hours and the ongoing argument over whether fixed bonuses received annually should be considered wages or not. Hard-line labor unions are another concern.

When asked whether Japanese companies were interested in the high quality workforce in Korea, she said they are more in need of labor for production lines.

“Many young Koreans are only interested in applying to conglomerates and dismiss small and midsize companies,” Osna said. “Most of the workers at the plants are foreigners and for Japanese companies it would be better to move to another Asean country.”

Additionally, the weakening yen isn’t helping Japanese companies in Korea. “When making the same investments in other countries, it cost 30 percent more than last year [here in Korea],” she said. “There are growing possibilities [that Japanese companies] would be investing in Asean countries whose currency values are weaker.”

One of these is electricity. “Although the power bill is half of that in Japan, I heard there were several companies that had to suspend operations temporarily due to power shortages,” Osna said.

At the end of the day, though, Japanese investors’ interest in investing in Korea actually started to decline after former President Lee Myung-bak made his surprise visit to the Dokdo islets last year, territory that Japan also claims.

Korea is a less welcoming place than before, she said.

“Japanese companies can not but to cower in a situation in which President Park Geun-hye’s wearing Asics sneakers [which are made in Japan]becomes a major issue,” Osna said.