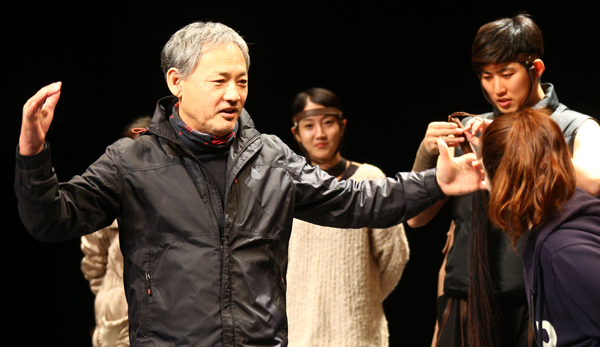 Former Culture Minister Yu In-chon rehearses “The Story of a Horse” with fellow actors on Tuesday at a cultural center in Haenam, South Jeolla. [JoongAng Ilbo]

The former culture minister took to the stage on Wednesday in his self-produced musical, “The Story of a Horse,” which he starred in and directed.

The story, based on “Kholstomer” by Russian writer Leo Tolstoy, revolves around a horse - aged and sick - that is reminiscing on his life, waiting for the moment when he will encounter death.

The musical adopts the perspective of the animal as a way of exposing some of the irrationalities of the human condition and the fluidity of life and death.

But what was perhaps most special about the production - which ran for two days from Wednesday - was that it was shown in a small cultural arts center in Haenam, South Jeolla, rather than in a renowned theater in the capital.

“When I was culture minister [from February 2008 to January 2010], I resolved to make the arts accessible to everyone, even those who lived in remote areas,” said Yu, who is a lifetime performer.

“I’m doing this here as an extension of that belief.”

One resident of Haenam, surnamed Jang, said he was glad performers from Seoul had come all that way to stage a performance.

But this wasn’t the first time Yu produced a show in a provincial theater.

“The Story of a Horse” in Haenam is Yu’s fourth regional performance so far this year.

“Many of the performance halls in the regional areas are not equipped with quality stage facilities,” Yu said. “That is why in some cases changes need to be made [in terms of stage setting] from the original version.

I’m not trying to say that doing so is inconvenient, but it’s too bad that people in regional areas are not able to enjoy the original performance.”

He added, “There are not that many professionals to work with in terms of setting up lighting and sound and the stage, so we often have to bring our own technical staff from Seoul.

“But still,” he said, “it’s more worthwhile than inconvenient.”

Yu noted that based on his experiences so far, the level of cultural awareness of regional audiences was quite high, even though their cultural facilities weren’t always of the highest quality.

He added that even regions outside the Seoul metropolitan area can find innovative ways to provide cultural experiences to their residents - for example by turning old warehouses into performance spaces.

“They should also be given the opportunity to see and understand plays of various genres.”