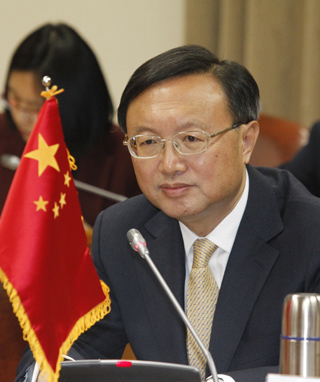 Chinese State Councilor Yang Jiechi is expected to arrive in Korea on Sunday for a three-day state visit to hold high-level strategic talks, the follow-up to a joint statement issued by President Park Geun-hye and President Xi Jinping in June.

The Ministry of Foreign Affairs yesterday confirmed Yang’s visit and said he is expected to meet with President Park, hold talks with Kim Jang-soo, chief of the Blue House’s National Security Office, and attend a luncheon hosted by Foreign Minister Yun Byung-se. The first Korea-China joint committee on humanities exchange will also be launched during Yang’s visit.

Yang, who previously served as China’s minister of foreign affairs from 2007 to 2013 and ambassador to Washington from 2000 to 2004, is also expected to visit enterprises here and tour outside Seoul.

Cho Tai-young, spokesman for the Foreign Ministry, said yesterday that an important aspect of Yang’s visit is the realization of the joint communique signed on President Park’s visit to Beijing in which the two leaders discussed a future vision for Korea and China.

At the Korea-China summit in June, the two countries agreed to set up various strategic dialogue channels, encouraging better communication among high-ranking diplomats and security officials. Yang and Kim, Park’s top security adviser, are expected to discuss “a wide spectrum of security issues” when they meet on Monday, the spokesman said.

“Through this, we expect a further strengthening of high-level diplomatic channels and dialogue” between Seoul and Beijing, Cho added. “This is not a one-time dialogue; we plan to continue to hold these kinds of talks in the future.”

In September, Yang met with Kim Kye-gwan, North Korea’s first vice foreign minister, who visited Beijing for a seminar marking the 10th anniversary of the launch of the six-party talks - a diplomatic channel, which includes the two Koreas, the United States, China, Japan and Russia, that aims to find a resolution to security concerns on the Korean Peninsula.

According to the Chinese Foreign Ministry, Yang emphasized to Kim that China hopes all related parties can work toward the early resumption of the stalled six-party talks, something Kim said he also supports. This comes as Cho Tae-yong, South Korea’s chief nuclear envoy, traveled to Beijing on a two-day visit Wednesday and met with his Chinese counterpart Wu Dawei. They had an “in-depth” discussion about denuclearization on the Korean Peninsula and the resumption of the six-party talks, according to the Chinese Foreign Ministry yesterday.

That trip follows separate visits by Cho and Wu earlier this month to Washington, where the two statesmen spoke with Glyn Davies, the U.S. special representative for North Korea policy. Wu also just completed a visit to Pyongyang last week.