DP lashes out at nominee for Welfare Ministry

DP lashes out at nominee for Welfare Ministry 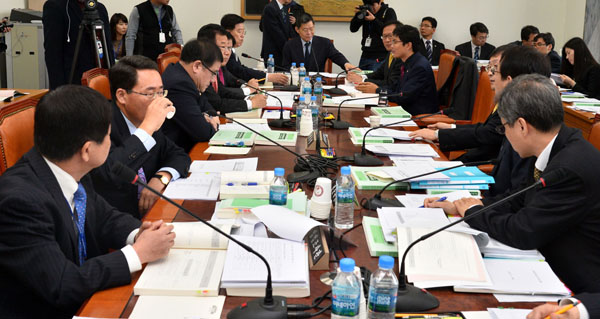 Lawmakers from both the ruling Saenuri Party and the main opposition Democratic Party convene yesterday for a subcommittee meeting of the Special Committee on Budget and Accounts in the National Assembly as the DP ended its boycott of Assembly schedules on Wednesday. [NEWSIS]

The largest opposition party said yesterday it will approve President Park Geun-hye’s nominees to head the Board of Audit and Inspection and the prosecution, but only if her nominee for welfare minister steps down.

Hwang Chan-hyon, chief of the Seoul Central District Court, who was nominated last month to head the Board of Audit and Inspection, was grilled by the ruling and opposition parties on Monday, while Kim Jin-tae, the nominee for prosecutor-general, attended a confirmation hearing on Wednesday.

Moon Hyung-pyo, the nominee for health and welfare minister, was questioned Tuesday and again Wednesday after lawmakers demanded an additional day to scrutinize his qualifications.

Criticizing Moon’s “lack of ethics,” the Democratic Party said yesterday that he must give up the nomination, and that the party will agree to Hwang and Kim’s appointments only after he bows out.

A National Assembly vote to confirm the appointments for Hwang and Moon is mandatory; however, the confirmation process for a new prosecutor-general is not binding.

During his confirmation hearing, Moon, a senior researcher at the Korea Development Institute, was accused of using a corporate credit card for his private affairs.

The Democratic Party claimed Moon used the card when he took personal leave as well to indulge his wife and son on their birthdays.

When asked if he would give up his ministerial post if the allegations turned out to be true, Moon said he would. Following the session, the Democrats demanded that he give up the nomination.

Earlier in the morning, Representative Chun Byung-hun, the Democratic floor leader, claimed the opposition party was discontented with all three nominees, calling it an “appointment disaster” on Park’s part.

He was particularly critical of Moon’s ethics and urged the president to seriously reconsider her choice. He also said the DP will ask the Board of Audit and Inspection to investigate all corporate credit card transactions from researchers at state-run institutes.

Further derailing appointment schedules, the Democrats boycotted a session scheduled in the afternoon to approve Hwang’s confirmation report. A motion to confirm Hwang’s appointment was scheduled at the plenary session today, but that prospect also seems unlikely.

At the National Assembly’s audit for the Blue House yesterday, Kim Ki-choon, chief of staff, stated the presidential office had no prior knowledge of Moon’s alleged misuse of a corporate credit card, but admitted to shortcomings in the vetting process.

“You can say that our vetting was poor,” he said. “But because we have to scrutinize so many major issues within a short period of time, we don’t always catch all the details.”

The DP’s opposition to Moon’s appointment appeared to be part of a strategy to put more pressure on the Park government over its handling of a series of scandals involving last year’s presidential election.

After 101 days of street protests, the Democrats brought their fight into the National Assembly, staging a three-day legislative boycott earlier this week and focusing its offensive on the confirmation hearings.