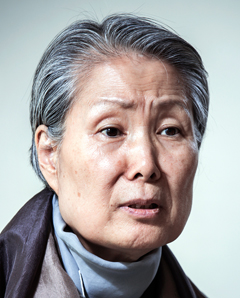 Byun Young-sup, the head of the Cultural Heritage Administration (CHA), is being replaced, according to sources at the organization and the Blue House, amid mounting criticism over the slapdash restoration of Sungnyemun, Korea’s National Treasure No. 1.

Byun was asked to resign from her post and assume full responsibility for the flawed restoration of Sungnyemun, Blue House officials said. She has already been notified of the decision.

Byun, an art history professor at Korea University, took over the CHA - which is in charge of the preservation of the country’s cultural properties - in March as the first woman to lead the organization.

However, in her short-lived tenure, several of her ambitious plans have fallen through, which some interpreted as a lack of ability.

Probably the biggest blow for Byun came in October, when lawmakers, the media and civic groups shed light on the shoddy restoration of Sungnyemun, which showed signs of damage to its wooden beams and tiles and cracks in its paint.

Earlier this week, President Park Geun-hye, who has a keen interest in cultural properties, ordered a thorough investigation into the situation, as well as punishment for those responsible.

Although there was some initial speculation that Byun may be held accountable, the decision to replace her came much sooner than expected. Park Yeong-geun, the CHA’s director general for planning and coordination, said he was surprised by the news.

“The decision should be viewed as a warning for the CHA,” he said. “We should work on regaining the public trust that we have lost.”