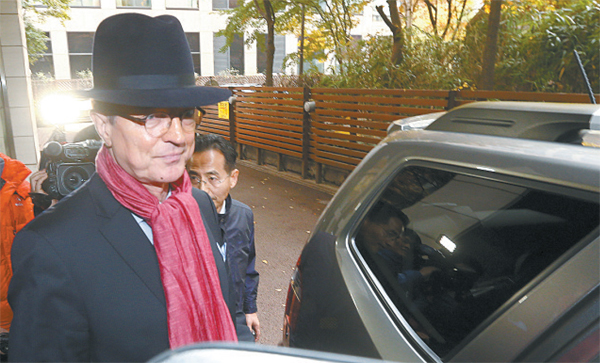 Lee Charm, president of the Korea Tourism Organization, stepped down from his post yesterday amid allegations that he went to a sexy massage parlor in Tokyo early last year and received 750,000 won ($652) worth of services paid for by Japanese company officials.

The German-born, blue-eyed president said in a statement that he did not visit a “soapland” establishment but did go to a “legally operated [massage parlor].” Lee, 59, said an acquaintance paid for the massage.

On Tuesday, JTBC reported that Lee visited a soapland establishment in Yoshiwara, a red-light district in Tokyo. Soaplands, once known as Turkish baths, are a type of adult massage parlor where male customers receive soapy massages by naked women.

“Unlike the informant’s allegation, I didn’t receive improper treatment by the Japanese officials. We visited [the massage parlor] for relaxation after checking it was a normal and legal place before dinner.”

Lee said he decided to resign in order to “restore his tarnished reputation.”

Lee, the first naturalized Korean citizen to head a state-run body, was the longest-serving head of the KTO. He took office in 2009 and served for four years and three months.

It was a dramatic exit for a man who fell in love with Korea when he first visited as a college student in 1978.

He told the Korea JoongAng Daily in a 2010 interview, “I felt interesting tension between the modern, dynamic, go-getting society and this ancient culture with its charming beauty.”

Ever since then he worked in broadcasting as a talk show host and appeared in a weekend drama series as a foreign son-in-law in 1994.

After he was chosen as a special aide to President Lee Myung-bak in 2007, Lee began to work in the public sector. During his tenure at the KTO, Lee tried to promote a culture of taking long leaves to travel around Korea and appreciate local tourism spots, something that was earlier frowned upon in Korean workplaces.

The number of foreign travelers visiting Korea exceeded a record 10 million last year during his term.