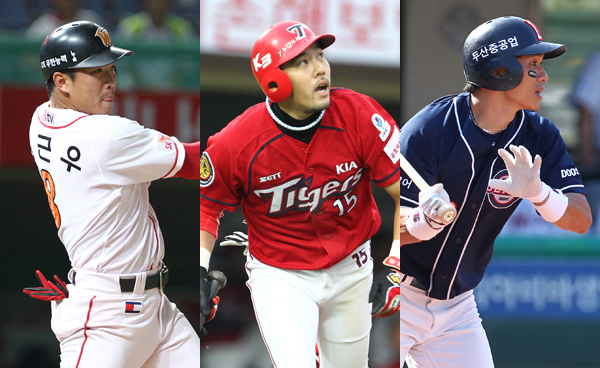 The Hanwha Eagles signed top free agents Jung Keun-woo of the SK Wyverns and Lee Yong-kyu of the Kia Tigers yesterday, putting Korean national team members at the top of their lineup in the leadoff and No. 2 spots.

The previous biggest KBO contract was in 2004 when Shim Jung-soo, who is now retired, signed a four-year, 6 billion won deal with the Samsung Lions.

The contract process was like a flash of lightning, with Kim Jong-soo, the Eagles’ contract manager, visiting Jung’s home after midnight Saturday to seal the deal.

“Kim, who went to the same university as me, visited my home for the contract and the team’s skipper, Kim Euong-yong, made a phone call during the negotiations and persuaded me to play,” said Jung. “I decided to join the Eagles because I felt strongly that the team really wanted me.”

After graduating from Busan High School and Korea University, Jung joined the Wyverns in 2005 and has been the league’s best second baseman. He has hit .301 in 991 games over the past nine seasons, with 1,057 hits, 377 RBI and 269 steals. He also played for the gold-medal-winning Korean national team in the 2008 Beijing Olympics, 2009 and 2013 World Baseball Classics and 2010 Asian Games.

While Kim was finalizing the contract with Jung, Eagles general manager Roh Jae-duk met with Tigers center fielder Lee, who had been unable to reach a deal with Kia last week. Under KBO rules, free agents can negotiate only with their current team for a week after the hot stove season officially begins. If they can’t secure a contract with their current team, they can negotiate with any other team.

“After midnight, general manager Roh gave me a call and wanted to meet right away,” Lee told reporters. “He said the team really needs me for the next season and in the future. I was able to see how they trust me, though I’m still not fully recovered from my shoulder surgery.” Lee is likely to miss the first two months next season.

“The Tigers’ Lee and Jung were our two targets,” Eagles skipper Kim told reporters. “We need to have decent outfielders, infielders and hitters at the top of the lineup. And I think this signing definitely improves the level of our team.”