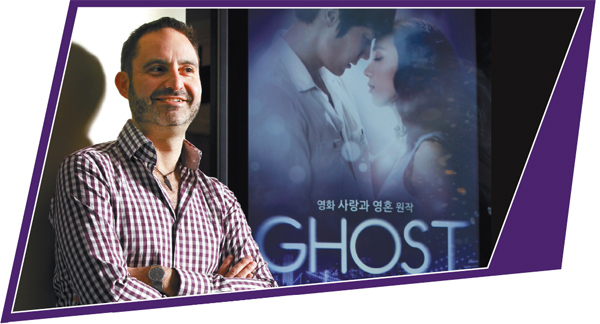 Paul Kieve, the stage illusionist for the musical “Ghost.” By Park Sang-moon

The movie “Ghost” was a huge hit when it was released in Korea in 1990. Women cut their hair short to look like Demi Moore’s character while guys signed up for pottery classes. It fact, it was Korea’s box office champion for years, until “Titanic” came long in 1997.

Two decades later, the iconic love story is returning to Korea, but this time as a musical. “Ghost” kicks off Sunday at the D-Cube Art Center in Sindorim, southwestern Seoul, with an all-star Korean cast, but it’s directed and staged by the same team who made the 2011 English version of the musical a hit in Manchester, England. The show then moved to the West End in London later in the year before heading to Broadway in 2012. 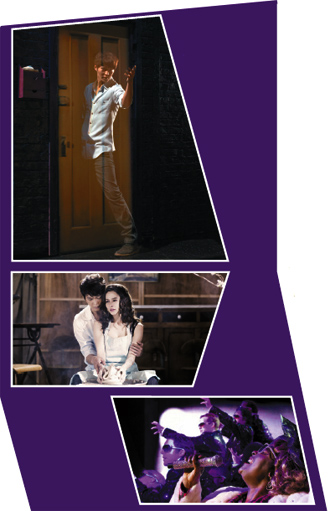 More than just a love story, though, “Ghost” is also a tale of the supernatural. Some of the most famous scenes in the film featured the spirit of Sam, who was played by Patrick Swayze, walking through walls, tables and even people.

The movies have all sorts of special effects to make the impossible happen, but how can you reproduce them on a live stage?

Paul Kieve, 46, a stage illusionist, has the answer. Kieve worked with director Matthew Warchus on several previous theatrical productions. But “Ghost” was much more elaborate, and for two years Kieve and Warchus collaborated to build the set and the props for the musical, trying to recreate some of the effects wizardry so crucial to the story.

After much work, Kieve was able to figure out how to make someone materialize on stage, right in front of the audience, or make one actor pass through another. His work was so impressive that he became the only illusionist ever to win a New York Drama Desk award.

Until 1991, Kieve had been working as a magician, performing his own illusions before halls of people. But after being hired as the magic adviser for a stage version of “The Invisible Man,” he realized he had a new calling and switched to stage productions. Since then, he has worked on many shows, including “The Witches,” “Our House,” “Lord of the Rings” and “Scrooge.” He has also created some magical effects for movies such as “Harry Potter and the Prisoner of Azkaban” and “Hugo.”

For the Korean production of “Ghost,” Kieve has come to Seoul to ensure that all the magic of the original production is still mesmerizing audiences.

Prior to the show’s premier, the Korea JoongAng Daily interviewed Kieve at the D-Cube Art Center. Here are some excerpts from the interview:

Q. The whole process of creating an illusion for a musical seems very tricky. Which scene was the most difficult for you to create?

A. One of the really difficult parts was death. There are three moments in the story where somebody dies and they split from their own body. In magic, there’s a rule: you never do the same trick twice. But in the story, sometimes you have to do the same trick twice or even three times. So I had to find three different ways to portray people splitting from their body. That was quite difficult.

Some of the smaller things were also difficult. For example, we’ve spent a lot of time trying to work the famous scene where a coin moves up the door. I figured out how to work it, but we decided it wasn’t right on the stage. It’s different when you do something on the stage to in a movie. In a movie, if your coin floats across the air, you just accept it as part of the story but on the stage, people are trying to work it out. They wonder, “Is it a magnet or is it a thread?” This can actually change the emotional impact of the audience. Rather than being sad for Molly, they get distracted into thinking, “How did that work?” So as an illusionist, I had to be careful how I use the illusions so it doesn’t distract the emotions.

My job is always working out what the audience is thinking, where are they looking and how I can use the lighting and the illusion to make people look very clearly at one thing and maybe not at something else.

As a magician, you also have a rule that you are not suppose to tell people how the trick works. But won’t the crew and actors find out your secret?

They do. It’s kind of an old-fashioned idea that magicians can never tell their secrets. But professional magicians on television need to explain to their crews to make the show look good. It’s the same on stage. It’s true that the crew and actors learn the techniques, but we have a secrecy contract that people sign so they won’t disclose anything. We’ve signed it in Korea as well. It makes them realize that they have to keep a secret, but also makes it very easy for them to answer. If somebody asks how it’s done, they can say, “Oh, I can’t tell you because I signed the contract,” because sometimes people can get very upset.

Of course you won’t tell me how the trick works, but did you have to invent new tricks for “Ghost?” It seems like with the advances in technology, you can create more sophisticated illusions.

Well, in fact, I research a lot of old things. I have a big library of 2,000 books that go back to 1630s. There are some clever ideas in these books. The first time that there was a famous stage ghost was in London in 1863. You may think all these things are terribly old-fashioned and rubbish now, but they were really clever and they did some amazing things in those days.

So I researched quite a lot of Victorian ghosts. But what I do is, I take some old ideas. I always say that any kind of invention is always based on something that’s gone before. Actually this production in Korea is the only one where you’ll see some of these things, especially at the end, the appearance and the disappearance of Sam, which magicians will say is a Holy Grail.