Strategic partnership not yet final

Strategic partnership not yet final 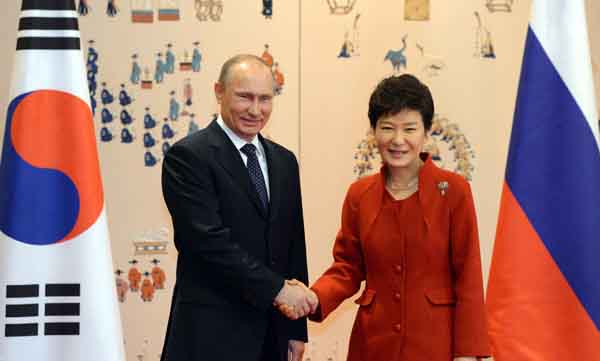 Russian President Vladmir Putin came to Seoul as the first Russian leader in eight years for a summit talk with South Korean President Park Geun-hye. It was their second meeting since they first met on the sidelines of the Group of 20 summit in St. Petersburg in September.

During the half-day meeting, the two leaders exchanged views on a wide range of issues in political, foreign, security, economic, trade, science, technology and cultural fields and announced a 34-point joint statement. They signed two agreements and 15 memoranda of understanding.

The keystone of the summit was Moscow’s support for President Park’s signature foreign agenda - building a trust-building process for lasting peace and co-prosperity on the Korean Peninsula and creating a framework for cross-continental cooperation between Europe and Asia through the so-called Eurasia Initiative.

The joint statement contained more specific action plans and constructive outlines on mutual cooperation than in the past. In other words, Seoul-Moscow talks in the past had been less impressive, with all talk and no action.

At the end of 2012, South Korea’s trade with Russia increased to $22.5 billion, but it still remains at one-tenth of that with China. In spite of Russia’s economic size - its gross domestic product is the world’s ninth largest - economic ties fell short of our expectations. Exchanges in other fields have equally been lackluster compared with the United States, China and Japan. From the evasive tone and attitude it showed after North Korea sank a South Korean naval ship in May 2010 and attacked the inhabited frontline island Yeonpyeong in November in the same year, Moscow clearly had not been serious about a “strategic” partnership with Seoul.

There are several reasons behind the discrepancy in the goals and realities of bilateral ties. The two have not built sufficient trust because of gaps and lopsidedness in the areas of mutual interests. South Korea hoped a strategic partnership with Russia would help solve problems with North Korea. Russia, however, placed higher importance in economic fields.

Structural factors also served as a stumbling block in advancing a bilateral relationship. South Korea inevitably is tied to the United States on the security front due to the geopolitical division on the peninsula.

North Korea, located in the middle, raises tensions whenever it can - and gets in the way of strategic cooperation between South Korea and Russia. South Korea, with its security status as dependant variable on the United States, has diplomatic limitations in upgrading its ties with Russia.

If the two countries sincerely want to put their bilateral ties on an equal strategic partnership level, they must opt out North Korean and U.S. factors as much as possible. Russia also must refrain from capitalizing on the opportunities from a divided Korea and instead try to create a reciprocally beneficial investment environment among Seoul, Pyongyang and Moscow by persuading Pyongyang to open up more.

South Korea should also dare to move out of U.S. influence and seek a more evened-out relationship with Russia and the United States through a more imaginative and practical diplomacy. South Korea must step out of its dichotomous approach of weighing United States and Russia and instead pursue more challenge-taking and innovative foreign policies.

Putin is the first leader from the four neighboring global powers to visit Seoul and also the only one to exchange summit visits with Park. We sincerely hope the two will play an active role in upgrading bilateral ties.

* The author is a professor and the director of the Institute of Russian Studies at Hankuk University of Foreign Studies.