Another day, another world record for Lee

Another day, another world record for Lee 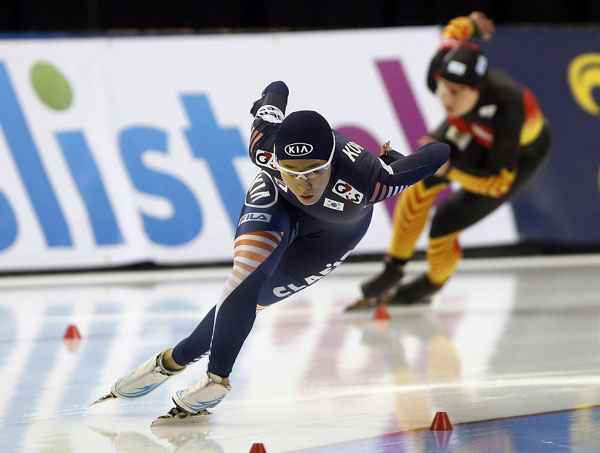 For the second straight day, 24-year-old Lee Sang-hwa broke her own world record in the 500-meter race, clocking a time of 36.36 seconds on Saturday at the International Skating Union (ISU) Speed Skating World Cup in Salt Lake City.

In the first race on Friday, she smashed her own world record with a time of 36.57 seconds.

On Nov. 9, she broke her own previous mark of 36.80 seconds set in January with a 36.74 performance at the ISU World Cup in Canada.

With her performance on Saturday, Lee became one of four skaters who have set world records four times or more in women’s 500 meters. The others include Catriona Le May Doan (Canada), Bonnie Blair (United States) and Christa Luding-Rothenburger (Germany).

The 2010 Vancouver Olympics champion has won all three 500-meter races in the World Cup - two in Calgary and the one in Utah - raising her hopes of winning gold in the 2014 Sochi Winter Olympics.

“I think she is in perfect shape when I see her skating,” said Kim Gwan-gyu of the Korea Skating Union. “I think she improved a lot, especially in the first 100 meters of the race, which was her biggest weakness.”

Analysts attribute Lee’s recent success to her improved strength and weight loss. Since the 2010 Vancouver Olympics, Lee has lost 5 kilograms (11 pounds) and concentrated on improving her lower body.

Lee did the final 400 meters in 26.27 seconds, which was also the fastest among competitors.

Since she joined the senior level last year, Shim has been won at least one gold medal in each of her last 10 World Cup events, becoming the ace on Korea’s short-track team.

“I think we [Korea] will be in good shape in Sochi,” Shim said.