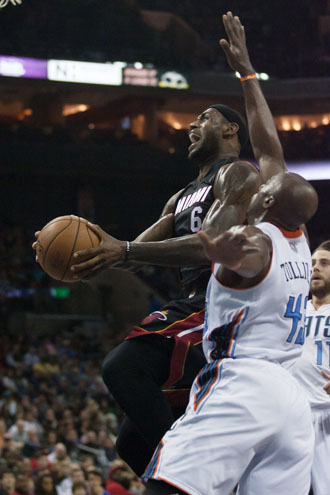 LeBron James goes up for a shot against Anthony Tolliver of Charlotte en route to a 30-point performance Saturday. [USA TODAY/NEWS1]

Charlotte Bobcats coach Steve Clifford said after all of these years in the NBA, he’s still amazed at some of the things LeBron James does.

“You know, he’d be fun to watch if you weren’t coaching the other team,” Clifford said.

With Mario Chalmers suspended, Chris Bosh limited due to foul trouble, Ray Allen out with the flu and Dwyane Wade a nonfactor, James came up big for the Heat. The four-time MVP was 13 of 18 from the field and had seven assists in his eighth 20-point game this season.

“More than anything, it was his energy,” Heat coach Erik Spoelstra said of James. “When you see him attacking off the glass and pushing coast to coast, you know he feels good with his body and you know it sets a great tone for our team. He’s playing with great energy on both ends of the court.”

Miami (7-3) relied on its bench to close the game out.

Beasley finished with 15 points and Anderson had 10 for the Heat, winners of six of their last seven overall.

Bosh said it was an odd feeling having so many starters out of the game in the fourth quarter with the outcome still in doubt.

James said he had intentions of returning to the game late in the fourth quarter but didn’t need to after the Heat’s reserves began to pull away with the lead.

Kemba Walker had 22 points to lead the Bobcats, who shot 35 percent from the field. Jeffery Taylor scored 14 points and has now finished in double digits in six of the last seven games.

The Bobcats (5-5) had won two straight coming in and stayed within 10 points for a good portion of the fourth quarter, but could never grab the lead.

James had 20 points in the first half on 8-of-11 shooting and Miami led by as many as 16. Only one of James’ first-half field goals came from outside of 10 feet as he did his damage driving and attacking the basket.

It’s a good thing for Miami that James was on his game early because the other parts of the big three struggled. Wade only played 23 minutes after his knee tightened up, while Bosh had three fouls and no points in eight first-half minutes. Bosh would later pick up his fifth foul with 4:27 left in the third quarter and drew a technical foul after he’d taken a seat on the bench. AP