Experts say the most pressing problem in Korea’s electric-vehicle industry is the lack of charging stations. [BLOOMBERG]

Electric vehicles have gone from being a dream to a reality. Local automakers already have EVs and have begun sales for private consumers, but Korea still has a long way to go, as concerns have been raised over a lack of infrastructure and debates continue about a quick charging standard.

According to the Global EV Outlook report by Clean Energy Ministerial’s Electric Vehicles Initiative (EVI) and the International Energy Agency (IEA), global EV sales - including plug-in hybrid and fuel cell models - have more than doubled between 2011 and 2012, exceeding the 100,000 sales milestone. The report speculates that EV sales could reach 6 million by 2020.

Korea has been trying to follow this trend, with automakers introducing EV models and selling to private consumers with a government subsidy. Hyundai Motor Group, the nation’s largest automaker, rolled out Kia’s Ray EV last year. GM Korea and Renault Samsung Motors have also joined the bandwagon by releasing the Spark EV and SM3 ZE, respectively. 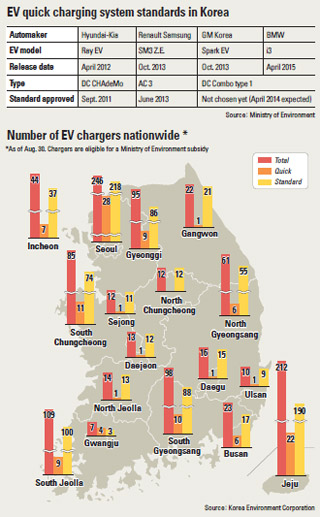 According to the government’s budget plan for next year, the Ministry of Trade, Industry and Energy’s R&D budget for environmentally-friendly cars was set at 32 billion won ($30 million), which is about 16 percent less than the current amount and nearly half of what it was in 2011, when the government budgeted more than 60 billion won.

The ministry supports a 15 million won subsidy per car for EV sales, and as buyers can get an additional subsidy from their regional government, this has been the biggest factor for consumers choosing to buy EVs, which usually cost between 30 million won and 40 million won.

“For last year, more than 20 billion won of the budget was not used, and since the case is also similar in this year, we had to adjust the budget realistically,” said Park Kwang-chil, electric-vehicle team manager at the Ministry of Environment during a SM3 ZE test drive event on Wednesday in Jeju. “If the subsidy is insufficient, we are even considering bringing other budgets to meet the demand.”

However as the subsidy budget decreases, industry insiders fear that their plan to expand EV sales is in danger. Renault Samsung Motors have set its EV sales goal at 4,000 units next year, but with the given subsidy - considering that the budget is used not only on EV sales support but also for setting up EV chargers - it is an almost impossible goal.

CEO Francois Provost said last week that the subsidy is needed for at least five more years, but the current EV subsidy policy ends in 2015, although EV buyers will still get support via a new system that gives incentives to cars with low-carbon emissions.

“The government subsidy is designed to encourage people to buy EVs and create interest from the beginning, but it can’t be an eternal policy,” said Kim Pil-soo, an automotive studies professor at Daelim University College who is also the chief of the Electric Vehicle Leaders’ Forum. “But since the government is also going to introduce an incentive system for low-carbon emissions, and the EVs have no emissions at all, it can be a solution.”

The low-carbon-emissions incentive system taxes consumers who buy cars that produce high levels of emissions, while giving money to those who buy cars that produce low levels of emissions. Industry insiders speculate that the subsidy level for EVs could reach 10 million won, but the Ministry of Environment denied that an exact amount has been confirmed.

While there is concern about how the decreasing budget will affect the expansion of the EV market, experts said that the most urgent problem is to expand the number of charging stations. The government aims to have 400 quick chargers and 8,000 standard chargers by 2015, but there are currently less than 2,000 EV chargers.

“Generally, one quick charger is needed per 20 EVs, while the number of standard chargers should equal the number of EVs,” said Kim. “Expanding the EV market is not about selling EVs, but having enough charging stations in the right places.”

The problem is that no one is aggressively moving forward to set up EV chargers. While the Environment Ministry is asking for help from the Energy Ministry, Land Ministry and Korea Electric Power Corporation (Kepco), as well as regional governments, the private sector is saying that the public sector is too sluggish.

“The private sector has been asking the government to make an environment for us so that we can’t take care of the infrastructure problem,” said Jeong Tae-young, the chief of the Electric Vehicle Charging Infrastructure Committee, which represents EV charger manufacturers. “The government can just solve this problem by making a law that mandates construction companies to have a certain number of chargers in apartments and buildings but currently there isn’t.”

Experts point out that the key to quickly expanding the EV market is to expand the number of quick chargers that enable drivers to charge their EVs in about 15 to 30 minutes. A standard charge takes an average of one to two hours.

“The expansion of quick chargers means you can drive farther and use EVs frequently,” Jeong said.

But the problem is that Korea has yet to agree on a quick charge system standard, and it will be too costly to set up quick chargers for each of the three systems - CHAdeMo, AC 3 phase, and DC Combo type 1. AC has been selected as the standard for the regular standard charge system.

At first, the government set quick chargers based on CHAdeMo, a standard that is commonly used by Japanese automakers, because Hyundai was the first manufacturer to supply EVs. But after Renault Samsung earned its approval for AC 3-phase quick-charging system, it is now trying to set up quick chargers that enable both methods.

However, it is facing a twist, with the release of GM Korea’s Spark EV and the BMW i3, which will come on market next year. Both cars use DC Combo type 1, which hasn’t earned standard certification yet because its frequency to send and receive charging information interferes with the Advanced Metering Infrastructure (AMI) that Kepco built nationwide as part of the country’s smart grid plan.

“Our system can work with Combo type 1 if we can replace the chips, but that will be too costly,” said an official at Kepco.

But industry insiders predict that the Korean Agency for Technology and Standards will soon approve the DC Combo type 1 and work to solve the problem. The global standard for the quick charge system is likely to be DC Combo type 1 because German and U.S. automakers are supporting that system.

They claim that DC Combo type 1 is better than CHAdeMo as it is more efficient and safe because both standard and quick charging is possible through a single socket.