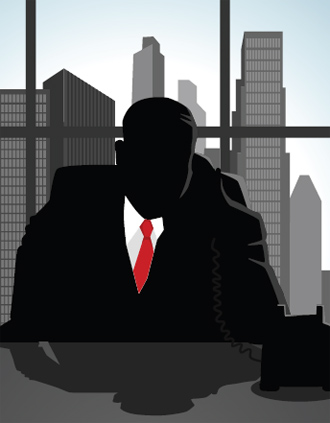 Under the current law, a listed company only has to report the number of top executives and the combined pay all those executives receive, so it was assumed the two men received roughly the same amount: 3.2 billion won. However, a separate study by the Financial Supervisory Service recently found that Chairman Cho actually earned roughly 5 billion won last year. When combing the paycheck he took from other affiliates of the insurance financial group, including the 1.1 billion won he received from the de facto holding company and 3.8 billion won from its brokerage firm, Cho pocketed roughly 9 billion won last year.

Combined with the dividend payment he earned, Cho’s income last year amounted to about 13.6 billion won. 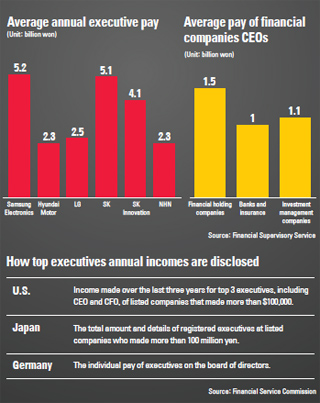 By comparison, the whole company last year made 96 billion won in net profit.

A similar situation can be seen with many manufacturers, as the market can only guess how much a conglomerate chairman earns, and the specific amount is rarely made clear.

The only publicly disclosed information by Samsung Electronics is that its top three executives’ annual incomes amounted to 15.6 billion won, not how much each of them earns.

The situation will be different starting next year after the revised capital market law is enacted starting Nov. 29.

Under the new regulation, listed companies have to report how much individual executives received the previous year - the rule applies to registered executives, referring to high-level officers with legal responsibilities, as designated by the commercial code. For companies whose fiscal years end in December, their reports disclosing individual executive payroll have to be filed in March.

According to the Financial Services Commission, about 2,050 companies will be subject to the new regulation. That includes all of the 1,663 publicly traded companies as well as unlisted companies with more than 500 shareholders or those that have secured financing by issuing any shares.

Executives who received more than 500 million won will have to disclose their exact income, down to the last won. Not only will current top-level executives have their income disclosed but also those who retired the year before.

Income disclosures must go beyond just their annual paychecks, including retirement payments, as well as other money they made during the year such as stock options that have not been exercised.

“We have decided to include retired executives otherwise companies could manipulate their figures,” said Suh Tae-jong, head of the FSC’s capital market department.

Suh said they included retiring executives to ensure companies did not try hiding their income by giving out large retirement payments.

Choi is the top executive at the world’s largest smartphone maker, who has been leading the legal battle against Apple.

Despite their importance to the company, they will not have to disclose the details of how much they will make this year.

The retail group said Chung changed positions to increase management responsibility at each affiliate, allowing the vice chairman to focus more on finding new growth opportunities. However industry observers have no doubt that Chung is not giving up his control over the retail group.

The FSC said it expects the income disclosure of top executives will not only improve the companies’ transparency but also cut down on what it calls irrationally excessive paychecks.

There has been growing public discontent over the large salaries that high-ranking executives have been pocketing, even when their companies have been driven to insolvency or have suffered from major performance failings.

In contrast, the average employee earned 60 million won last year, according to a recent study by Chaebul.com.

Financial companies’ top executives also have not been free from growing public anger over their salaries. The average salary that a financial group CEO received last year was estimated to be 1.5 billion won. Top executives at banks, insurers and investment management companies earned around 1 billion won.

However the banking industry as a whole has been suffering from deteriorating profitability.

As a result, financial regulators recently ordered financial companies to revamp how their CEOs’ pay is determined.

Unlike Korea, companies in many advanced economies have long disclosed the pay of top executives.

The United States was one of the early countries to require the disclosure of top executive pay, in laws adopted in 1933 during the Great Depression. More recently, the Occupy Wall Street movement rose up in part over the issue of executive compensation, especially at large financial companies like AIG that received public bailout funds in the financial crisis.

Japan in 2010 revised its law to require the disclosure of individual executives who made more than 100 million yen ($996,000).

The disclosure of top executive pay is often used as a monitoring tool for shareholders. This is supposed to prevent C-level executives from making unethical decisions that reward themselves at the expense of the company.

The Korean business environment is different from other countries because of the large presence of the conglomerates, which are usually run by the families that own them, even though they have a separate chief executive. The new decision for disclosing the income of high-ranking executives in Korea was mostly driven by the Park Geun-hye administration’s call for “economic democratization.”

Most of the business community is not too happy about the new disclosure system, complaining that the rule will only spread current anti-conglomerate sentiments.

“It could damage the basic corporate incentive system of compensating performances,” said Choo Kwang-ho, who heads the corporate policy department at the nation’s leading business lobby group, the Federation of Korean Industries.

“The 500 million won [level] is even excessive compared to Japan’s.”

Some warn that the owners of the major conglomerates could seek to avoid the disclosure requirement by reducing their management responsibilities and stepping down from registered executive positions.

In fact, Chairman Cho at Meritz in June stepped down from his registered executive position at de facto holding companies and several other affiliates.

The company said the decision was made to raise the transparency of management.

Kim Kap-rae, head of the corporate policy department at the Korea Capital Market Institute, agreed that disclosing the paycheck of top-level executives is a global standard that would raise transparency, but he worried the new regulation could cause unanticipated effects.

“The regulations have to be adopted gradually with additional changes made along the way,” Kim said.