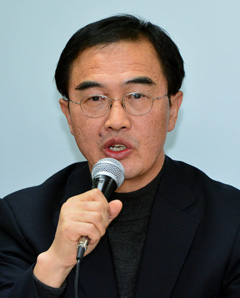 A group of close former aides to late President Roh Moo-hyun rose up against the prosecution yesterday, stating that the ex-president never ordered anyone to delete a transcript of his 2007 summit with North Korean leader Kim Jong-il in which he denied the legitimacy of the Northern Limit Line, a de facto maritime border with the regime.

Cho Myoung-gyon, who served as Roh’s security policy secretary and managed the initial transcript during the 2007 inter-Korean summit, held a press conference along with several Roh loyalists at the Roh Moo-hyun Foundation yesterday to refute some allegations by the prosecution regarding Roh’s alleged order to erase the original transcript.

“The prosecution claims I confessed to them during questioning in January and July that Roh ordered me to delete the original transcript,” Cho said. “It is true that I said that in January, but I did not say that in July.

“At July’s questioning, I clarified to prosecutors that my testimony in January was not true, as my version of events was not accurate,” Cho added.

Cho said Roh had never ordered anyone to delete the transcript. “I do not recall receiving any orders from the president [Roh] to delete the entire [original] transcript from the e-jiwon system or not to transfer it to the National Archives,” Cho said. “I am emphasizing this point to you again.”

On Friday, the prosecution indicted Cho and Baek Jong-chun, the former chief presidential secretary for unification, foreign and security policies, on charges of violating the Act on the Management of Presidential Archives and the penal code governing public electronic records.

According to the prosecution, at the behest of Roh, Cho revised the transcript and created a record designated as top secret. Cho allegedly destroyed a hard copy of the transcript that he printed out and deleted the electronic file from the e-jiwon system by using a special technical method. The prosecution said the file was deleted in an abnormal way.

Although he can’t exactly remember his work at the time, Cho said it must have been his own decision to delete the original transcript.

“There was no necessity for us to keep the initial transcript, so I did not take measures to preserve it or transfer it [to the National Archives],” he said.

Representative Yoon Sang-hyun, a senior member of the ruling Saenuri Party, criticized Cho’s reversal of his previous testimony. “Cho must be honest in front of history,” Yoon said at the meeting yesterday. “He could not delete it by himself.”