Helicopter crash into a high rise is unprecedented

Helicopter crash into a high rise is unprecedented 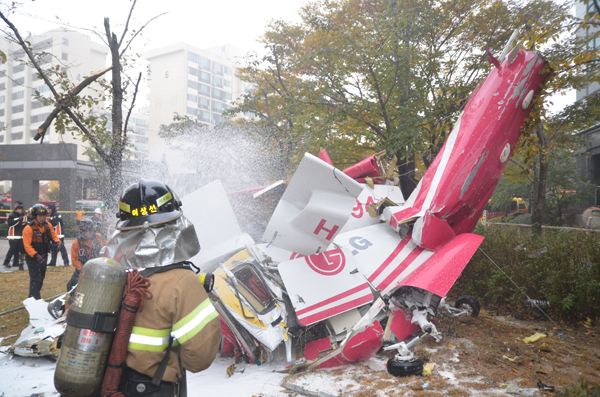 Firefighters respond to the scene of a helicopter crash in Samseong-dong, southern Seoul, after the chopper, owned by LG Electronics, plunged to the ground after hitting a 38-story apartment building Saturday morning in dense fog. The two pilots were killed, but no casualties were reported among the residents. [NEWS1]

In the aftermath of a helicopter crash into a deluxe high-rise apartment building in southern Seoul on Saturday morning, authorities have banned entry into the damaged I-Park apartment complex, located in the affluent Gangnam District.

The decision comes amid growing safety concerns that debris from the accident - which broke windows and damaged the outer walls of the building - could fall down to the ground.

However, the Ministry of Land, Infrastructure and Transport said yesterday that following the first safety inspection, they judged that there was no possibility of a collapse because no structural damage was detected.

The helicopter clipped the side of the complex’s 102 building, shattering windows and damaging the outside of the structure between the 21st and 27th floors before falling to the ground.

The ministry added that it will take about two weeks for a thorough safety inspection to be completed.

The property values of the damaged I-Park apartments, built by Hyundai Development Company in 2004, are some of the highest in Seoul.

With the entry ban in place, a group of about 30 residents of the 38-story building spent the night at a nearby hotel or with relatives.

The helicopter, a U.S.-built Sikorsky S-76 model owned by LG Electronics, crashed into the building in heavy fog at about 8:54 a.m. on Saturday, killing the only two men on board. Authorities recovered the bodies of Park In-gyu, the 58-year-old pilot, and Goh Jong-jin, the 37-year-old co-pilot, at the scene.

The helicopter, one of the two private choppers the conglomerate had purchased in 2007, was heading for a heliport in Jamsil, near the I-Park complex, to pick up four LG executives for a trip to a factory line in the southwestern city of Jeonju, North Jeolla.

According to LG, Park had mentioned about two hours before takeoff that the four officials might need to go to Gimpo International Airport for their flight to Jeonju because of dense fog over Seoul. However, he called again at about 8 a.m. confirming he would be able to pick up the officials in Jamsil, as weather conditions had improved.

The company’s remarks were intended to alleviate suspicions that the mobile phone maker might have pressured Park to come to Jamsil despite heavy fog just for the convenience of the officials, who live near the Jamsil area.

In a press briefing Saturday, an aviation official said the helicopter might have deviated from its course just a few minutes prior to the fatal accident. “The helicopter might have deviated from the flight path when it was flying over the Han River near the heliport in Jamsil [where it was supposed to pick up the four LG officials], though further examination is necessary to find the exact route it took,” said Kim Jae-young, head of the Seoul Regional Aviation Administration.

The ministry yesterday began analyzing the black box retrieved from the downed chopper. The analysis, expected to take at least six months, could reveal the flight route, altitude and velocity of the helicopter, as well as the conversations inside the cockpit at the time of the crash.

The ministry announced yesterday that it will conduct a special safety inspection into 33 companies that own and operate 109 private helicopters, which will last from today through Dec. 31.

“We will bring stern [legal] punishments to companies found to have violated safety codes,” the ministry said.

The Seoul Metropolitan Government also said yesterday that it will conduct a joint inspection with the Seoul aviation administration until the end of the year to inspect 159 sky-rise buildings that could be potentially hazardous for aircraft, as well as the maintenance conditions at 488 heliports across the city.

LG Electronics, meanwhile, is insured by LIG Insurance and is expected to receive up to $11 million for the demolished helicopter, $10 million for compensation to the I-Park residents and $400,000 for the two deceased pilots.