Life in Sejong is a bowl of hassles

Life in Sejong is a bowl of hassles 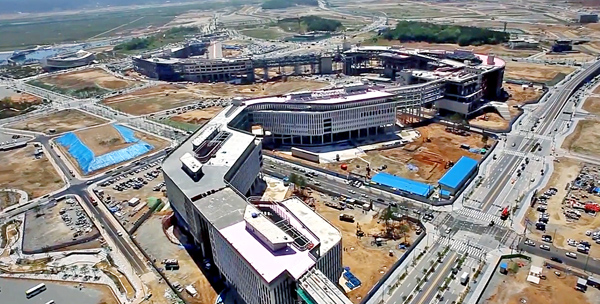 A bird’s eye view of phase two of the central government complex in Sejong City, which is still under construction. About 10,000 officials from six agencies begin their move to the complex from Nov. 13. [NEWSIS]

SEJONG - It’s 10:20 p.m. when a weary division chief of the Ministry of Strategy and Finance gets off from a train at Osong Station in Cheongwon, North Chungcheong. He’s returning from a two-day business trip to Seoul and is carrying a backpack filled with documents, underwear and socks. He rushes to catch the last express bus, known as BRT or Bus Rapid Transit, to Sejong City, the home of his ministry for the last 11 months.

Because he has to consult with other ministries that didn’t move to Sejong City, the new mini-capital, he is forced to take five to six business trips to Seoul every month. He has become a digital nomad. In order to give directions to his team in Sejong City, check on documents and handle other administrative tasks, his smartphone has become an irreplaceable tool. When an urgent matter arises, he heads to the smart work center at the Central Government Complex.

Finding a reasonable motel has been a challenge from the start. “Staying near the Gwanghwamun area of central Seoul is difficult because of the high cost,” he said. “So I often use a motel near the Sookmyung University because it is rather cheap but close to downtown.”

The Korean government’s move to Sejong City continues to create hassles for civil servants. The Prime Minister’s Office moved to the administrative hub, 120 kilometers (75 miles) south of Seoul, in September 2012. Since then six more ministries, including the Ministry of Strategy and Finance, completed their relocation and have spent almost a year in their new offices. All told, 4,973 civil servants have moved to new offices.

But not all of them have moved homes. A significant number are still spending up to five hours a day commuting to and from Seoul: 1,400 or 23 percent of all the civil servants working in the city. Neck pillows and sleep shades are must-haves for the commuter buses. “Because of the education of my children, I have no choice but to commute, although it is rigorous,” said a bureau chief of the Ministry of Oceans and Fisheries.

Inevitably, work performances are suffering. In a JoongAng Ilbo survey of 120 civil servants working at the six ministries in Sejong, the respondents said the stress of their work became worse, and they now spend more time at work but their efficiency has gone down.

According to the poll conducted on Oct. 17, one out of three respondents said their work became more stressful, and that they now spend more time at the office. A full 84 percent said their work productivity has decreased. Only 14 percent said they experienced no change. The long distance between Sejong City and the National Assembly in Seoul was blamed by 63 percent of the respondents for being a major problem, as were the frequent absences of their bosses and the dispersed locations of ministries.

To improve efficiency, 77 percent said the National Assembly also needs to move to Sejong City. Others said other ministries and government offices should also be moved. As of now, government ministries and offices are located in Seoul, Gwacheon in Gyeonggi, Daejeon and Sejong.

Major offices that remain in Seoul are the National Assembly, Blue House, Ministry of Foreign Affairs, Ministry of Unification, Ministry of Security and Public Administration, the Constitutional Court and the Supreme Court.

A discussion is ongoing among lawmakers to relocate the Ministry of Oceans and Fisheries away from Sejong and to a southern port city; if it is moved, government ministries will be located in five different cities around the country.

Some public servants also argued that the Blue House should move to Sejong City. Others argued that the ministries in Sejong should go back to their original locations in Seoul or Gwacheon.

According to the survey, 46 percent of the public servants in Sejong said the arrival of more ministries won’t make much change to their working conditions, while 22 percent said they will get worse. Only 32 percent said they expected improvements.

And if things are tough at work in Sejong City, they’re not much better at home. Civil servants complain that dining costs, monthly rents and transportation fees are high, and there’s a shortage of hospitals, gas stations and parking spots. Many say living conditions are poor because of the continuing construction work in the city. They also complain of separation from their families in Seoul.

Traffic jams are also a problem because Sejong City’s main roads have lanes exclusively used by the BRT buses. “Right now, the only residents are those living in the First Village and civil servants from the six ministries, but we already see some serious traffic,” said Lee Gyeong-taek, a taxi driver. “When the population grows next year, it’s going to be traffic hell.”

Sejong City was designed to be eco-friendly. Its transportation system was supposed to minimize the use of privately-owned cars while encouraging people to use public transport or bicycles. As part of the plan, the city was built with smaller road capacities and parking lots.

That has quickly proven to be folly. While the roads are jammed with cars, the BRT lanes remain nearly empty throughout the day. The city operates 12 buses, each costing more than 300 million won, but less than 2,500 people use the service. Each bus carries about 200 passengers a day, and the break-even point for the system is a daily average of 500 passengers.

In addition to traffic jams, finding a parking spot is tough, and the situation will grow worse as more government offices move to the city. With an expected 4,800 more workers, the new ministries have parking spaces for only 2,578 cars.

Many are concerned about the poor education infrastructure for children. “Because of the poor education environment, many of the people who moved to the Sejong City with their children are regretting their choices,” said a woman civil servant of the Ministry of Agriculture.

Although the city advertised that its schools have small class sizes and advanced electronics, students and parents said the high-tech lessons are ineffective. Others said the city lacks afterschool programs.

“I have a middle school senior,” said an official of the Ministry of Strategy and Finance. “I wanted to send him to a better school in nearby Daejeon, but there is no support system, so we gave up. Even if I have to commute, our family is more than willing to move back to Seoul.”