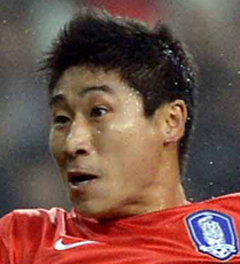 The Korean national football team, fresh from overpowering world No. 6 Switzerland 2-1 in a friendly match on Friday in Seoul, gets another chance to show it’s ready for the 2014 World Cup when it faces Russia in Dubai today at 11 p.m. Korea time. This is coach Hong Myung-bo’s first away game since he became the leader of the Taegeuk Warriors four months ago.

Analysts predicted that Hong will put Lee Keun-ho between Bolton Wanderers midfielder Lee Chung-yong, who will be on the right wing, and “sonsation” Son Heung-min of Leverkusen, to pair him up with the 197-centimeter (6-foot-6) striker Kim Shin-wook, who is leading the K-League Classic with 19 goals this season. Kim and Lee Keun-ho were teammates for the Ulsan Hyundai until Lee left the team for his mandatory military service, which he is fulfilling by playing for the military’s team, the Sangju Sangmu Phoenix FC.

Lee took over from Kim Bo-kyung, who plays midfield for Cardiff City, after halftime in Friday’s game.

Lee provided much more energy and generated more scoring chances. While Switzerland’s defenders concentrated on pressing Kim Shin-wook, Lee penetrated into the opponent’s areas well and eventually assisted on Lee Chung-yong’s winning goal with a clean cross from the left side in the 86th minutes.

“I knew exactly what I had to do in that game,” Lee Keun-ho said. “And because it wasn’t my first time playing with Shin-wook, I was able to predict how he would move. I think it gave us many good chances.”

The coach said the former Ulsan Hyundai duo was efficient and indicated that he would roll them out again in today’s match.

“The national team had a hard time finding a striker for the top of the offense line since ace striker Park Chu-young of Arsenal has not been included in the national team,” said analyst Han Jun-hee. “But Kim certainly showed his talent in the Switzerland match. I think this is a chance for him to become the starting striker for the national team in Brazil. The key is how Kim will cooperate with the other attacking midfielders like Keun-ho and Son.”

The match against Russia is Hong’s 10th game as the national team coach. Over the last four months, he had matches in Seoul, Hwanseong and Suwon in Gyeonggi, Jeonju in North Jeolla, and Cheonan in South Chungcheong. The team had huge fan support in those games and it didn’t have to worry about jet lag, so this match in Dubai could be a better rehearsal for the 2014 Brazil World Cup.

The national team departed to Dubai on Saturday afternoon, a day after its Switzerland match, on a 10-hour flight. The players have had only three days to recover, a schedule similar to the World Cup.

The match against Russia will be held in the afternoon and the weather there is likely be more than 30 degrees Celsius (86 degrees Fahrenheit).

“I think our players will be fine because many of them played their European league games only days after they had A-matches,” Hong said. “Because this is the last A-match we have this year, we will try to test many tactics during the game to get more ideas for the Brazil World Cup.”