Park In-bee is LPGA’s player of the year

Park In-bee is LPGA’s player of the year 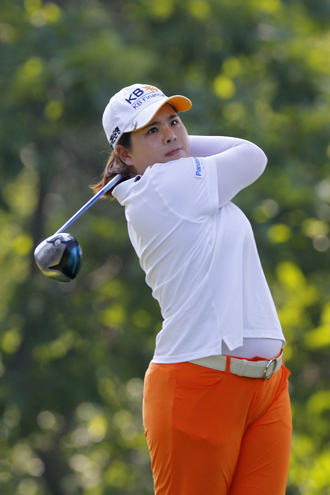 Park In-bee, the world’s No. 1 female golfer, became the first Korean to clinch the LPGA Tour’s player of the year after finishing the Lorena Ochoa Invitational in Guadalajara, Mexico, on Sunday with a fourth place, 11-under-par 277, putting together a final round of 3-under 69.

Golfers on the LPGA Tour earn points if they finish an event in the top 10. The winner of an event earns 30 points, the runner-up earns 12 points, and points are doubled in the five LPGA major championships.

“I’m very happy that I have done something huge in the history of Korean golf,” Park said in an interview after the tournament.

“There are many excellent Korean golfers and they have accomplished many things in the world of golf, but there were no Koreans who won the player of the year. I really wanted to win this award all season long because no one in Korea has done it, and I’m extremely happy my dream has come true.”

“I have been playing golf to become a player like Pak Se-ri, and I think this accomplishment could inspire many other young Korean golfers,” she said. “I’m 200 percent satisfied with this season, and I think the best moment of my entire career is right now.”

By winning the U.S. Open in June, Park became the first golfer since 1946 to win three straight major tournaments.

She had been going for a “calendar Grand Slam,” by winning four major tournaments in one year, but failed in August at the Ricoh Women’s British Open, where she finished tied for 42nd. 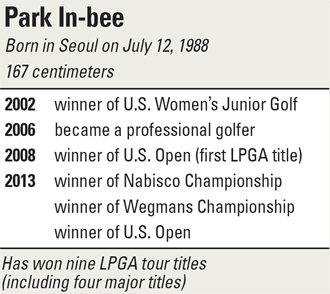 Since then, Park struggled while the Norwegian came on strong. Pettersen won the 2013 Sunrise LPGA Taiwan Championship in late October, propelling her up the standings to right behind Park.

“I thought I would win the player of the year award because I really was in good shape until the middle of the season,” Park said. “But nothing has gone easy since then. I think I will remember this season for a long time because it was one of the toughest seasons for me.”

Park will play in the CME Group Titleholders event that tees off on Thursday. In addition to being player of the year, Park is trying to become the top money winner of the year.

Park is currently leading the way for prize winners, too, with $2.39 million earned this year. But Pettersen is trailing close behind with $2.28 million, and the winner at the CME Group Titleholders gets $500,000.

Park will wrap up the season with the KLPGA Tour Swinging Skirts 2013 World Ladies Masters that will be held in Taiwan in December.

Park said she will prepare for the next season from the Gold Coast in Australia.

“I think I want to take a long, nice break after the season,” Park said. “I will develop a plan for the new year in January.”

Since the player of the year award started in 1966, Shin Ji-yai was the closest Korean woman to winning it all. In 2009 she fell one point short of Lorena Ochoa, who zipped past Shin on the final day of the season for her fourth player of the year title.