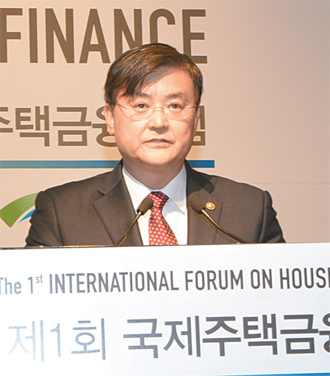 Land Minister Suh Seoung-hwan speaks at a forum yesterday at the Hotel Shilla. Provided by the ministry

“The national housing fund operator would be better invested in the REIT (real estate investment trust) business of LH, if needed, helping improve the financial health of the corporation and boosting the public lease business,” said the minister.

LH’s REIT business aims to purchase houses of the so-called house poor who are struggling to pay their mortgages.

“Until recently, it was possible for the government to provide public rental housings without financial burden owing to the profits of development projects incurred by rapid economic growth, but this system would no longer work,” he said.

“Marking completion of the 100 trillion won fund, the government now needs to think of ways to use this abundant liquid fund to increase housing welfare, especially for the vulnerable class,” the minister said.

His suggestion drew criticism from some, who questioned whether it is right to use a public fund to improve the fiscal condition of a public entity long criticized for inefficient management. LH is now saddled with about 150 trillion won of debt.