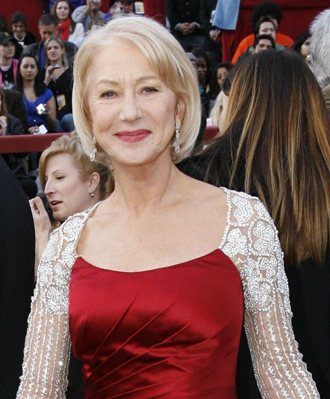 In this 2008 photo, Helen Mirren poses as she arrives at the 80th annual Academy Awards. [REUTERS/NEWS1]

LONDON - Helen Mirren was named best actress for her portrayal of Queen Elizabeth II in “The Audience” at the Evening Standard Theatre Awards on Sunday while the best actor award was split between Rory Kinnear and Adrian Lester as the leads in “Othello”.

The award for best play on the London stage went to Lucy Kirkwood for “Chimerica,” an exploration of the relationship between the United States and China as seen through the eyes of an American photojournalist trying to track down a young protester who faced down a tank in Tiananmen Square in 1989.

A revival of Stephen Sondheim’s “Merrily We Roll Along,” a flop on Broadway in 1981, was named best musical while Richard Eyre won best director for a revival of Ibsen’s “Ghosts.”

“People come from around the world to see plays in London,” Mayor Boris Johnson said as he made his way into the awards banquet at the Savoy Hotel. “It’s the place where the theater really got going in the 16th century.”

Mirren, who won an Oscar for her portrayal of Queen Elizabeth in Steven Frears’s movie “The Queen,” said she feels such awards are being given to the queen as much as to her.

“The Audience” shows her meeting with prime ministers over many decades, and required that she portray a woman in her 20s as well as an octogenarian.

“I’ve always felt playing her majesty that it’s actually her majesty who’s winning the award and not me,” Mirren told Reuters.

“I did feel very much doing a play that the response to the play was as much a response to that person, that extraordinary woman, as it was to my performance. But I should be very proud,” she said to the press before the official announcement.

Kinnear and Lester said that portraying Othello and Iago in the production of Shakespeare’s play at the National Theater had been a challenge, both personally and in terms of seeing how the play could be interpreted for new audiences.

“It was important that we got on with each other because we’re spending an awfully long time ruining each other’s lives,” Kinnear said.

London Evening Standard editor Sarah Sands, one of the judges, said, “The high level of theatrical daring and creativity seen on the London stage this year made our choices tougher than ever to make.

“We, like the rest of the world, have been dazzled by the talent on show.”