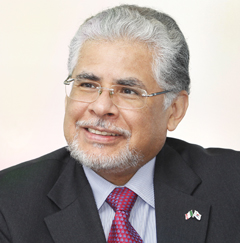 Mexico is increasing the attention it pays to Korea, which became its sixth-largest global trading partner in 2012, said the country’s new Ambassador to Korea Jose Luis Bernal.

“The volume of trade is very high considering two factors: First, the fact we don’t have a free trade agreement yet, and second, the lack of direct transportation between Korean and Mexico,” said Bernal, an economics expert, as he sat down with the Korea JoongAng Daily on Nov. 7 in his office in Yongsan District, central Seoul.

Bernal was posted to Seoul in July, a time when both countries had recently had changes in their administrations. Mexican President Enrique Pena Nieto was inaugurated in December 2012, while President Park Geun-hye was inaugurated in February. The two presidents held a bilateral summit on the sidelines of an Asia-Pacific Economic Cooperation (APEC) meeting in Bali, Indonesia, on Oct. 7.

Nieto is expected to make a visit to Korea on Park’s invitation next year, said Bernal.

A career diplomat for over three decades, Bernal has previously served as ambassador to the Czech Republic and Switzerland, and has also served as chief economic adviser in Mexico’s Ministry of Foreign Affairs.

Bernal said to continue to improve this bilateral relationship, Mexico is trying to expand trade by keeping in close touch with importers, importers’ associations and distributors here. Mexico’s largest exports to Korea include minerals, metals and food.

He added that electronics make up a big part of exports from Korea to Mexico and the reverse. Some electronic products or parts are sent to Mexico, where they are assembled and finished before being sent back to Korea.

“The other part of the work has to do with the presence of Korean companies in Mexico,” he said. “Today we have more than 1,500 Korean companies established in Mexico with direct investment. That means the introduction of new technologies that did not exist before in the Mexican market.” While this trend has been going on for the last two to three decades, it has accelerated in the last 10 years, he added.

“We have big admiration for the way Korea was able to develop itself in last 45 to 50 years,” Bernal said. “And we need to learn from history - and in the particular case of Korea, we find many similarities with in the past and the situation we have in many sectors today in Mexican society. I refer in particular to the level of poverty. We look at the not very distant past of Korea: Korean society was a poor society, agrarian and not technical.”

Mexico, too, has undergone a transformation, “going from a 90 percent rural country to become a country with a high level of industrialization,” said Bernal.

Despite such progress, he said, “We have not been able to improve or create the mechanism for the distribution of income that allows for everyone to take part in the development process. This is an area in which we need to learn from other countries, and we take Korea as one of the best examples from which we can draw lessons.”

The Mexican government is working on how to absorb more technologies in its market, he said. “And for that to happen, we need to have skilled people, trained people in Mexico, that will be able to be part of this new era of bilateral partnership.”

He said there needs to be an increased level of educational exchanges and more engagement of Korean companies in specific training programs for Mexican young people, especially engineers and technicians. The two countries have been interested in a bilateral free trade agreement and negotiations took place between 2007-8, which were stalled because of opposition from sectors on both sides. Talks were resumed this year.

“We are not launching any negotiation,” Bernal added, “until we are certain we will have support from every sector to make this happen.”

But in the meantime, there are other processes happening such as the Trans-Pacific Partnership, or TPP, an ambitious plan to create a multilateral free trade zone involving countries such as Australia, Canada, Japan, Mexico, New Zealand, Singapore and the United States, which Korea is currently deliberating. The TPP “will mean new rules of international trade for a region that at this point of history is the most dynamic region in world trade and in many cases for the world economy,” said Bernal.

Mexico, Peru, Colombia and Chile are also part of a Latin American trade bloc called the Pacific Alliance, and the four countries make up about half of the total economy of Latin America.

Many countries have observer status in the alliance, including Korea, and Bernal said Seoul has been “one of the most active followers of the negotiations within the alliance.”