Relationship between Korea, Kenya in bloom

Relationship between Korea, Kenya in bloom 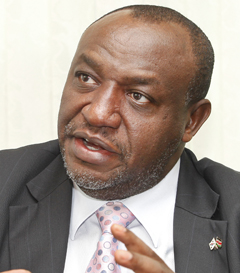 Ever since Korea and Kenya forged diplomatic relations in 1964, the two countries have found it challenging to further their relationship, in large part due to the physical distance between them - before direct flights were available it often took about 18 hours by air - and historically sporadic contact.

But now, as innovations in transportation continue, and as Africa’s reputation as a new and untapped market grows, the bond between Korea and Kenya has room to advance.

The Korea JoongAng Daily recently sat down with Ngovi Kitau, the Kenyan ambassador to Korea, to discuss the evolution of this relationship.

Q. What used to be the main challenge in developing bilateral relations between Kenya and Korea?

A. One of the big challenges was the communication issue. Since the two countries are so far apart, there weren’t enough opportunities to communicate. Through a lot of discussion and negotiation - which took about two years - Korean Air finally launched the first direct flight to Africa in June last year.

So, we now have Korean Air’s direct flight to Nairobi three times a week, and that is the only Asian airline to Africa. That flight really facilitated an increase in activity between the two countries. When I first came to Korea, the annual number of Korean visitors to Kenya was 4,000 last year. But last year, that number increased to 9,400. To put that figure in perspective, it places Korea as the fourth-largest visiting country in Asia … [just behind] India, China and Japan. But if we take into account the population, the number is really significant.

How do you expect the flight to play a role in the future?

The direct flight also will help boost bilateral trade. Currently, trade size is at about $250 million. But I believe the size will increase following the launch of direct flights. Thanks to the flight, we also have tons of cargo.

In the past, it wasn’t easy to export flour because it would perish by the time it arrived in Korea - it needed to be delivered within 18 hours, and in the past it took more than 18 hours to get to Kenya, with layovers in Dubai and Bangkok. Now, it only takes about 13 hours.

It will also help exports of Kenyan coffee to Korea. In 2009, Kenya exported about $1 million worth of coffee to Korea, but now we’ve reached $6 million. The quality of coffee is determined by the altitude, weather conditions of the area and the type of soil, and Kenya has ideal geographic conditions for this.

What other progress has been made?

Another reason why the relationship between Korea and Kenya has not fully matured is because there hasn’t been senior-level interaction between the two countries. That’s the main challenge. But that challenge was addressed last year when Korea’s Prime Minister Kim Hwang-sik visited Kenya for the first time since 1964. While meeting with his Kenyan counterpart, Raila Odinga, and President Mwai Kibaki in Nairobi, he pledged to pass on Korea’s knowledge, in which the country advanced itself from a war-ravaged nation into an economic powerhouse. To reciprocate, the Kenyan prime minister visited Korea in November last year. This is a very big achievement, because if senior people are not interacting the cooperation process slows down.

How is the relationship taking shape under the Park Geun-hye administration?

The current government is very supportive. After she took office, President Park Geun-hye sent a special envoy to Kenya two times, and later Speaker of the National Assembly Kang Chang-hee. The special envoys visited Kenya’s institutes and [small and medium enterprises] to share Korea’s knowledge on the subject. The two countries’ ties are solidifying after back-to-back visits by our prime ministers and foreign ministers last year and over this year.

Why do you think the current government is supportive?

One reason is that Korea now needs a new market, and Kenya is now an attractive new market to the country. Korea has reached a peak so far, and the question is, “How do you go into the next phase?” Korea is very good at adopting innovative methods and modifying them. But now, China and India have picked up that strategy. This is why President Park is pushing for a “creative economy,” which emphasizes innovation and new ideas. To realize a creative economy, Korea also needs new consumers and markets. In this context, I think President Park sees a great future in Africa.