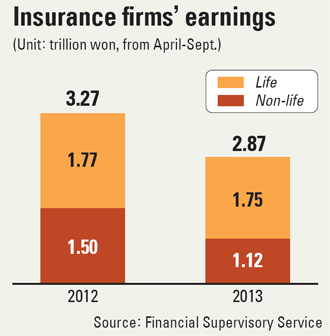 The net income of insurance companies fell more than 12 percent in the first half of their fiscal year as nonlife insurers saw higher loss rates for auto insurance, the Financial Supervisory Service said yesterday.

Meanwhile, with a drop in net income, local insurers’ return-on-asset and return-on-equity ratios fell. The two indexes are key measures of profitability. According to the FSS, the total amount of assets held by local insurers increased, but because of low interest rates, the return-on-asset ratio for life insurance companies fell 0.4 percentage point from 5.1 percent to 4.7 percent, and 0.6 percentage point for nonlife insurers from 4.5 percent to 3.9 percent. The lower the rate of return, the less profit companies make.