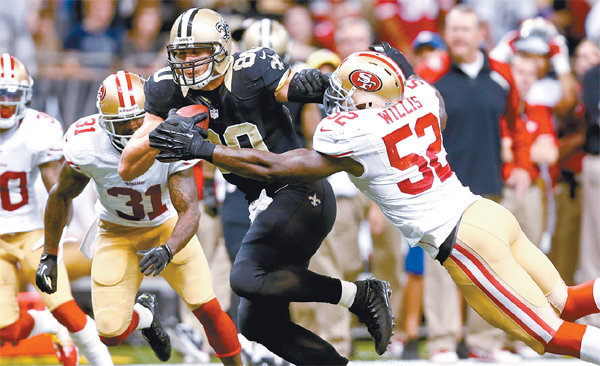 New Orleans Saints tight end Jimmy Graham (80) is tackled by San Francisco 49ers inside linebacker Patrick Willis (52) during the fourth quarter of a game at the Mercedes-Benz Superdome. The Saints defeated the 49ers 23-20. [USA TODAY/NEWS1]

Staggered by a shoulder pad to the head and ripped down by a forearm hit across the neck, Drew Brees crumpled on the turf with blood on his chin.

Yet the vicious sack by San Francisco’s Ahmad Brooks also drew a flag that canceled out Brees’ lost fumble with 3:12 left and gave the Saints’ prolific quarterback one chance too many. Brees guided New Orleans to two late Garrett Hartley field goals - the second as time expired - and the Saints upended the 49ers 23-20 on Sunday.

“All I remember is just getting clothes-lined in the chin and as I’m on the ground, I’m saying, ‘That’s got to be a flag,”’ Brees said. “One of my teammates kind of picked me up and said, ‘Are you all right?’ and he said, ‘Don’t worry, there’s a flag.’

The Superdome crowd grumbled each time the Saints settled for high-pressure field goals in the fourth quarter, apparently nervous that Hartley, who’d missed four of six attempts in the previous three games, would slip up again.

Instead, Hartley made all three of his field goal attempts in the final quarter to wipe out New Orleans’ 20-14 deficit.

His 42-yarder with 2:06 left tied it. His game-winner was from 31 yards. He also hit from 21 yards earlier. The Saints trailed 20-17 when Brooks leveled Brees. The Niners protested the resulting flag vigorously.

The Saints (8-2) improved to 6-0 at home despite three turnovers and a failed fourth down conversion. The victory guaranteed the Saints would remain at least a game ahead of Carolina - which plays Monday night - for first place in the NFC South. It also kept New Orleans one game in the loss column behind top NFC seed Seattle.

Colin Kaepernick passed for two scores, but finished with only 127 yards and was sacked three times as the Niners (6-4) lost their second straight.

The Saints’ defense, one of the worst in NFL history a year ago, played well enough to keep the Saints within striking distance despite what appeared to be a number of seemingly costly mistakes. Junior Galette’s sack helped stall the Niners’ last drive.

Kaepernick completed 17 of 31 passes and scrambled three times for 25 yards. His last run was a 16-yarder on third-and-long that came up 3 yards short of a first down with less than two minutes to go. AP