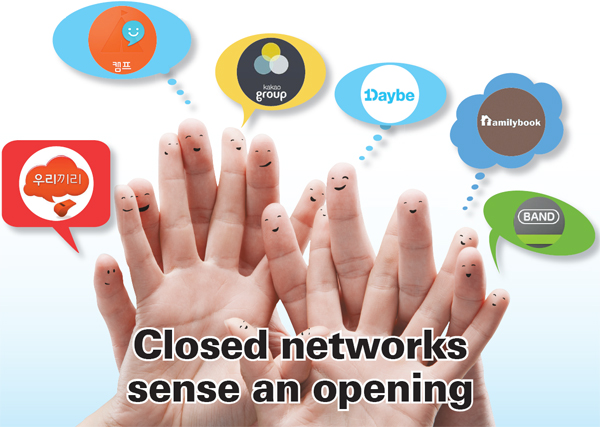 Last winter, Lee Seung-woo, 28, a company worker in Hwaseong, Gyeonggi, posted a photo on Facebook of him posing comically with his girlfriend. The photo, which he thought showed his natural side, surprised some of his friends, who embarrassed him by saying he was not the person they thought he was.

That made him more cautious and less active on Facebook. Instead, he signed up for Between, an app for couples where he has been sharing photos and messages exclusively with his girlfriend.

“I like Between because it provides space only for the two of us,” said Lee. “[My friends] will be appalled to see me in these photos, but I don’t have to worry about the photos being seen and I am relieved.”

More Koreans are feeling wary and weary about exposing themselves on “open” Social Networking Services and are turning to more closed, intimate spaces.

NHN’s Band and Daum’s Camp are mobile platforms that are similar to the online cafes run by the country’s two major portal sites, where people exchange information only among those with membership.

Band has seen rapid growth, with its number of downloads surpassing 20 million last month, only 14 months since its launch.

Camp, launched last year for Android and iOS operating systems, features the “Amity and Group Meeting,” where people meet for the first time offline and then maintain a network online. It accounts for the largest - 30 percent - of Camp users, said Daum.

“Our user base has strengthened significantly compared to the early days,” said Kang Yu-kyeong of Daum’s corporate communications team. 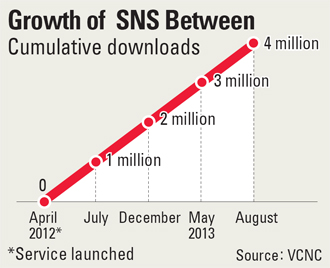 Daum also runs a photo-album-based SNS called With, where users freely post photographs and can easily share them by tagging related friends in the album. The registration and friend-making processes are automatically done by interlocking with a device’s phone book as the application installs. Users can upload up to 500 megabits of photographs and videos, and privacy is well maintained by a customized management function enabled on each album, according to the company.

Familybook, developed by Hansigan.com, shares messages and photos among family members. “Familybook only allows users to invite and permit selected family members to a group, preventing users from frustrations caused by automatically and randomly added friends getting access to large portions of private postings,” the company said.

The app especially enables users to separately manage their own families and in-laws, grabbing the attention of married women who feel uncomfortable when in-laws send friend requests they don’t want to accept but can’t refuse.

About 50,000 users are registered on Familybook, and a cumulative 200,000 downloads have been made since its launch in January 2012, according to the Cha Hong-gyun of Hansigan.

Between, an application exclusively for couples, was the first of its kind in the world, according to the Korean developer, VCNC. Similar apps have been developed since in the United States and UK, such as Duet, Couple and Avocado. Kooki provides a similar service in Korea.

VCNC, which surpassed 4 million downloads in August, says 35 percent of its user base is from foreign markets like Japan, Southeast Asia and China.

Closed SNS, although their recent marked growth is based on mobile platforms, is nothing new to Korean online users.

“Korean SNS culture developed from a closed model, like Cyworld, and while most users later moved on to open models from other countries like Facebook and Twitter, the demand for a closed model always existed,” said Kim Pil-soo of Hyundai Research Institute.

Kim said the closed SNS will maintain its appeal for those fatigued by overexposure on open SNS, but it is unlikely to overtake the latter.

“I think the two kinds will exist together to satisfy distinct demands,” he said.

The closed environment also can limit the room for mass advertising, leaving those companies to come up with a business model. VCNC, the developer of Between, said the company is seeking a transformation from private spaces for the couples to a platform, which could involve marketers to raise profitability.

Many former closed-type SNS that were popular among Koreans, such as “I Love School,” an online school reunion, went the way of the dinosaur because they failed to make money.

“Unless SNS finds a smart focus and develops a profit-creating model, many of those closed SNS services could prove to be just a fad,” said Jeong Sae-bom, vice president of Fast Track Asia, a start-up investor.