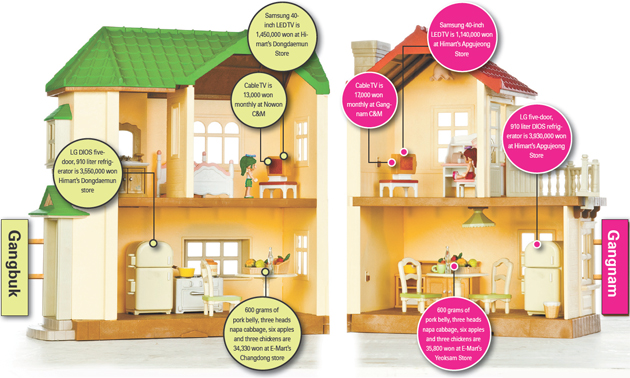 Price-conscious consumers who are always looking for bargains should look somewhere other than Gangnam. Like maybe Gangbuk in northern Seoul, where the same medicine produced by the same pharmaceutical company costs less.

The beef restaurant chain Bongsanjib specializes in chadolbaki, a thinly sliced beef brisket dish. Its main restaurant is in Samgakji in Yongsan District, northern Seoul, and it has branches in Samseong-dong and Apgujeong-dong in Gangnam.

Its Samseong-dong store sells a single portion, or 160 grams, of chadolbaki for 25,000 won.

There is no different at discount store chains.

When it comes to services, the price difference grows. At Leekaja Hairbis’ Nowon Station salon in Gangbuk District, customers pay 17,500 won for a haircut. At the salon in Cheongdam-dong, Gangnam, patrons get clipped for 85,000 won.

In case of hair strengthening, the Nowon salon charges 150,000 won, while the cheapest product in Cheongdam-dong is 330,000 won, enough to make your hair stand on its end. 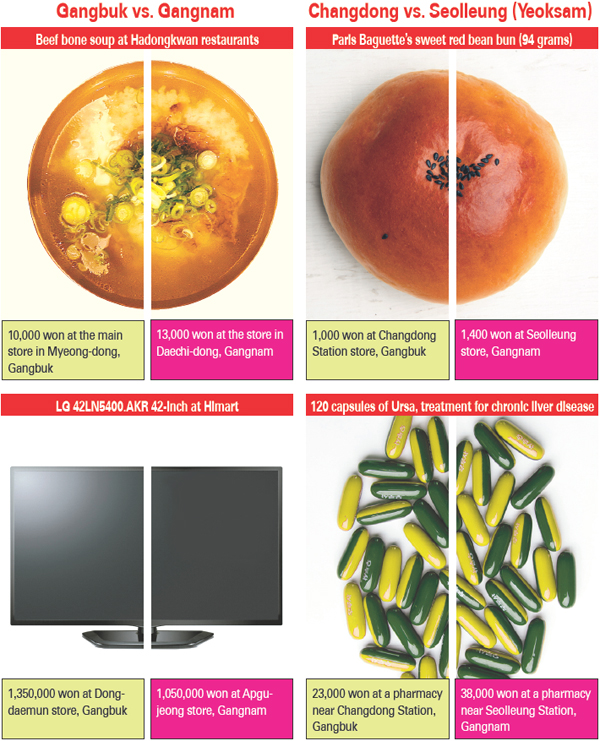 Then why are the same products and services so much more expensive in Gangnam?

Kim Se-kwon, CEO of Bongsanjip, cited the different preferences of customers as one reason.

“Also, as there are many cases in Gangbuk of get-togethers by groups of co-workers and students, price is much more of a consideration than quality.”

In terms of prices for services, a hair stylist at a famous hair salon in Cheongdam-dong, Gangnam, said prices differ greatly depending on which stylist cuts the hair.

“Most of the expensive stylists are concentrated in Gangnam. The price is not higher in Gangnam just because it is located in Gangnam, but because there are more professional and experienced stylists,” said the stylist.

“We don’t have to pay rent at the main store in Gangbuk as we own the building, but we have to pay millions of won every month for the Nonhyeon store in Gangnam. As the number of customers is not any higher in Gangnam, we have no choice but to price everything higher in order to stay in business,” said the restaurant owner.

Nam Joon-woo, professor of economics at Sogang University, says price elasticity is responsible for the gap.

“In regions where price elasticity is larger, raising the price even by a little would significantly decrease the demand, whereas in places where the elasticity is low, like Gangnam, there is almost no change in demand,” said Nam.

“As price elasticity is smaller in Gangnam where income is much higher compared to Gangbuk, businesses can charge more.”

Seo Young-gu, professor of business administration at Sookmyung Women’s University, says it’s a matter of psychology: “Even though consumers receive exactly the same services in the two areas, there is a value in the level of satisfaction they get by having their hair done in Cheongdam-dong, the style-rich area in Gangnam.”

Some experts say that rather than any actual relationship between high price and high quality, the key is the way businesses make customers think the services or products they get might be better.

“As there is also a saying that you get what you pay for, people often vaguely think that higher prices would bring higher value. People naturally think that when the products or services are much pricier in Gangnam, something would be better, whether ingredients or the quality of services,” said Beom Sang-kyu, professor of business administration at Konkuk University.