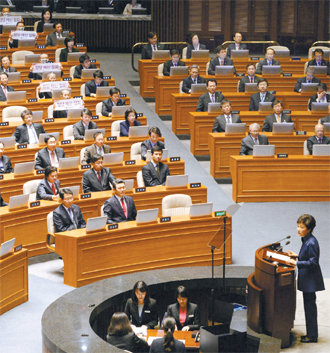 In a gesture to cool an angry standoff between the ruling and opposition parties, President Park Geun-hye vowed to show respect to the National Assembly and work toward genuine compromises in her first administrative policy speech yesterday.

“The center of politics lies in the National Assembly,” she said, “I think there is no topic that cannot be discussed within the Assembly. If you sufficiently discuss and reach an agreement on any matter, including various problems the opposition party has raised recently, I would respect and accept it.”

The president, dressed in an entirely blue outfit down to her shoes - blue is the official color of the opposition Democratic Party - was referring to a long-running standoff between the Democrats and her Saenuri Party over the National Intelligence Agency’s alleged smear campaign in last year’s presidential campaign, which targeted her opponent.

The opposition has been demanding the president launch a special probe of the NIS, a special National Assembly committee to reform the spy agency and a reversal of the government’s recent decision to scale down a welfare allowance for senior citizens.

Park’s remarks yesterday may have signaled a partial accommodation of those demands.

“It’s been a year since there was the presidential election,” she said. “But I, as president, feel very sorry that confrontation and conflict persist even until now.”

She promised to take punitive measures against anyone responsible for the smear campaign as soon as the prosecution completes its investigation into the case.

She also implored lawmakers several times to “cooperate” in passing various bills designed to revive the economy that have been the victims of paralysis in the Assembly.

The speech was Park’s first policy address at the National Assembly, and she was the fourth president to visit the Assembly to deliver one.

Many of her predecessors had their prime minister or vice finance minister read such speeches on their behalf.

Park also offered to make such speeches regular events to show “respect” to the National Assembly and create a “new political culture.”

Through the 30-minute speech, lawmakers - mostly from the ruling Saenuri Party - applauded over 30 times and gave a standing ovation as the president left. Independent lawmaker Ahn Cheol-soo also applauded.

Whenever clapping broke out, Unified Progressive Party Representative Kim Sun-dong hoisted a sign that read, “Withdraw the decision to dissolve the party.”

Park’s government has asked the Constitutional Court to disband the UPP for being anti-state.

All five UPP lawmakers arrived with shaved heads - a result of a tonsure protest 12 days ago - wearing masks displaying handwritten Korean letters reading “minju,” or democracy. Chang Han-na, a DP lawmaker, walked out about 15 minutes into Park’s speech, saying the content was “too disappointing.”

In a move to protest the president’s failure to comply with their demands, Democrats held a rally at the stairs leading to the Assembly building. They shouted the slogans, “Destroyer of democracy! Breaker of livelihoods! Destruction of promises!”

At a meeting with party executives later in the afternoon, DP Chairman Kim Han-gill said: “We haven’t seen the light of hope. There were a lot of words but no answers. It is impossible to cook rice with lukewarm water.”

The party agreed to submit a bill today to propose the firing of Justice Minister Hwang Kyo-ahn, NIS head Nam Jae-joon and Minister of Patriots and Veterans Affairs Park Sung-choon.

On the other hand, Yoo Il-ho, a Saenuri spokesman, said, “We think President Park’s speech was a sufficient reply to the claims persistently posed by the opposition.”

But the Saenuri Party, inspired by the president’s speech, announced later in the day that it would accept one of three demands from the DP ? setting up a special committee to reform the NIS ? but refused to launch a special investigation into the NIS smear campaign allegation. Democrats, in response, claimed the special committee is meaningless without a special probe.

When Kang kicked the bus, the agent caught him by the back of his coat - probably not recognizing the lawmaker - and Kang counterattacked by hitting the agent’s face with his head. The agent suffered lacerations on his lips and was taken to the general hospital nearby.

The Blue House said in a statement that the agent is considering legal action against the lawmaker.

Chung Ho-joon, a DP spokesman, said later that the Blue House should apologize, claiming the presidential guard was insulting the lawmaker.

Park touched on a number of her administration’s key policy initiatives during the speech: economic revitalization, national happiness, cultural prosperity and forming the foundation for peaceful unification.

She enumerated signs of an improved economy as a result of her policies over the past 10 months, such as the economic growth rate hovering above 1 percent for two quarters in a row and monthly new employment figures surpassing 400,000 for three straight months.

Park stressed the government should now push ahead with “economic revitalization, job creation and stabilization of livelihoods.”

The government submitted a 357.7 trillion won ($336 billion) budget for next year, an increase of 4.6 percent from this year.

“We are faced with a lot of difficulties now,” she said. “It is high time that we began fresh from the starting point.”

The president also vowed to root out “structural and chronic corruption” in nuclear power plants, defense, railroads and cultural heritage as the first step toward “normalizing abnormalities.” The initial target would be the public sector, she added.

Mentioning the importance of culture, Park said she would take the initiative in helping Korean culture shine further and to publicize it around the globe, raising Koreans’ pride.

“I have verified the infinite potential of Korea’s culture industry, witnessing those European youngsters enthusiastic about K-pop, Korean dramas and films,” she said, describing her recent trip to Europe.

Concerning inter-Korean relations, she emphasized the importance of dialogue. “Although the Kaesong Industrial Complex has reopened, three key issues - transportation, communications and customs - remain unresolved. No progress has been observed in actual normalization of the complex and its internationalization yet,” she said.

However, the president said she would proceed with a trust-building process for the Korean Peninsula based on “firm principles and tolerance.”