KBO teams are paying too much for redemption

KBO teams are paying too much for redemption 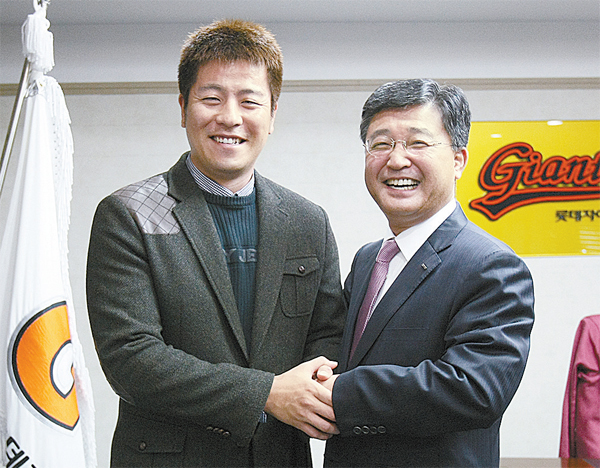 After the Lotte Giants signed a four-year, 3.5 billion won ($3.3 million) deal with free-agent first baseman Choi Jun-suk of the Doosan Bears on Monday, the 2014 free-agent market is officially closed. There were 16 free agents and 15 of them signed contracts, mostly for surprising amounts. The only exception is Kia Tigers right-hander ace Yoon Suk-min, who has declared that he will play for a Major League Baseball team next season.

In this year’s nine-day free-agent market, Korea Baseball Organization teams spent about 50 billion won on 15 players, the largest amount in KBO history since the league was established in 1982. It was certainly an overheated hot stove season. Most of the players were overpaid, thanks to some big shoppers that were desperate to keep their franchise stars and who needed to acquire some big-name players due to decreased attendance and recent losing seasons after years of poor club management.

On Nov. 13, the Lotte Giants signed a four-year, 7.5 billion won deal with their 28-year-old catcher, Kang Min-ho. It was the largest contract in KBO history since 2004, when the Samsung Lions signed a four-year, 6 billion won deal with slugger Shim Jung-soo of the Hyundai Unicorns. The league was shocked at the time, but a few people said Shim was overpaid because he was one of the league’s dominating sluggers, along with Lions slugger Lee Seung-yeop, a rival of Shim until 2003. Shim hit 46 home runs in 2002, then hit .335 with 53 home runs in the 2003 season.

SK Wyverns second baseman Jung Keun-woo, 31, signed with the Hanwha Eagles for 7 billion won and the league’s best leadoff hitter, Lee Yong-kyu of the Kia Tigers, also signed with the Eagles for 6.7 billion won - the second- and third-largest contracts in KBO history - on Sunday. The hot stove season never cooled off. The NC Dinos signed two free agents from the Doosan Bears: center fielder Lee Jong-wook, 33, for 5 billion won and Son Si-heon, 33, for 3 billion won. The worst deal was the Kia Tigers’ signing of LG Twins free agent Lee Dae-hyung, 30, for 2.4 billion won, which happened because the Eagles hijacked the Tigers’ leadoff hitter. The Twins center fielder only hit .237, with 42 hits, 10 RBI and 13 steals in 102 games. This year wasn’t Lee’s only bad season. He hit .178 in 2012 and .249 in 2011. He has hit above .300 only once - in 2007 - since 2003.

The average salary for KBO players in 2013 was 94.9 million won, but the teams that signed big-name players offered an average contract of 1 billion won, which includes salary plus a signing bonus.

“The minimum salary for a KBO player is 24 million won,” analyst Ha Il-sung said. “Paying too much to one or two particular players means that someone else on the team receives less.” For example, the total expense for the Samsung Lions, the richest team in the league, was 8.8 billion won this season.

Some would say it is not a problem that better players earn more money. However, KBO teams don’t operate like MLB teams. All KBO teams are run by the country’s major conglomerates, which consider their teams as advertising tools that can improve the image of their companies. This is the only reason why conglomerates run baseball teams, even though they never make a profit. They want good results, but they don’t want to spend big money as they don’t consider baseball to be a serious business.

The biggest shoppers in this hot stove season were obviously the Giants and the Eagles - who have the worst farm systems in the league and have been losing fans every year.

When the Giants’ best slugger, first baseman Lee Dae-ho, hit the free-agent market after the 2011 season, Lee told the team that he wanted a 700 million won annual salary, but the team said it could only pay him 630 million won. At that time a 700 million won salary was the highest in KBO history, but the Giants lost their best hitter - who led the league in seven offensive categories except steals in 2010 - over 70 million won. Lee hit .364, with 44 home runs and 133 RBI and led the league in three offensive categories in 2011. The Giants also failed to re-sign their franchise star outfielder, Kim Joo-chan, and slugger Hong Sung-heon for similar reasons. In the meantime, their attendance has fallen 40 percent, according to the KBO, and the team failed to advance to the postseason for the first time since 2008.

The Eagles are worse than the Giants. They have finished in last place for five of the past six seasons. They have a poor farm system and failed to land decent foreign players or big-name players in recent seasons. The only thing they did well was letting the league’s best pitcher, Ryu Hyun-jin, move to MLB. With the 26 billion won they received from the Los Angeles Dodgers through the posting system, they have acquired the league’s top two leadoff hitters from the Wyverns and Tigers. After the terms of the contract were revealed, the price for Bears’ center fielder Lee Jong-wook and Son Si-heon was inflated.

A similar situation took place last year, when the Eagles drove up the price for the Giants’ Kim Joo-chan. Kim was the Eagles’ big target and he was close to making a deal, but the Tigers were able to sign him to a four-year, 5 billion won contract at the last minute. The Eagles, who were sick of losing, spent 16.3 billion won on five players, including three of their own free agents.

“Such inflation will continue in next year’s offseason because of this year’s signings,” said Ha. “But I don’t think there will be big shoppers like the Eagles and Giants next year other than the KT Wiz, the 10th team that will join the league in the 2015 season, because other teams such as the Lions, Bears and Nexen Heroes have strong farm systems and are no longer big shoppers in the league.”