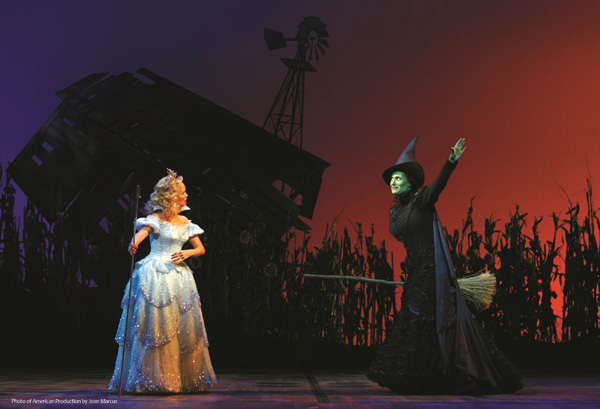 The Korean production of the musical “Wicked” kicks off on Friday at the Charlotte Theater in Jamsil, southeastern Seoul. Above is an image from its American production. Provided by Joan Marcus

Saturday and Sunday: With the success of her third full-length album, “Modern Times,” Korea’s so-called “little sister” IU will present her second solo concert. The work of the singer, whose real name is Lee Ji-eun, has been praised for its maturity and sophistication, with its take on a wide range of genres such as swing, jazz and bossa nova.

Nov. 30, Dec. 1: Lee Seung-gi, the multi-talented entertainer, is back as a singer, presenting a concert titled “Concert of Hope.” Since 2009, Lee has performed his “Concert of Hope” each year, taking a different approach with the show’s music and staging each time.

Dec. 6: Kenny G, one of the world’s most famous saxophone players, comes to Korea once more. Ever since his 1992 album “Breathless” sold 15 million copies, Kenny G has been a global icon in smooth jazz and adult contemporary music. This time, he will be performing with both his band and the Korean Symphony Orchestra, their second team up since 2012.

Dec. 13, 14: For the fifth year, several leading Korean singers are coming together for “The Vocalist Concert.” This year’s lineup features Bobby Kim, Ali, Lee Jung and Park Wan-gyu, four singers all known for their unique style.

“The Vocalist Concert” started in 2009 with Bobby Kim, Kim Bum-soo and Wheesung. This year’s show will differ, however, thanks to the addition of Park, who is more of a rocker than a crooner.

The concert starts on Friday at 8 p.m. and on Saturday at Friday; 7 p.m.

Dec. 20 to 24: Psy is ready to dance under the moonlight with his Korean fans. The singer’s concerts are always popular thanks to the singer’s nonstop energy on stage.

Psy recently wrote on Twitter that he had a hard time last year despite his amazing international breakthrough, because he had to keep performing only “Gangnam Style” and “Gentleman.” For this concert, he will perform around 15 songs, as per usual for his concerts in Korea.

Dec. 20 to 22, 24: One of the best vocalists in Korea, Lee Seung-chul will present his third series of concerts in 2013, “Carol Line.” These shows follow “Beach Voice,” his summer concert in August, and “Love Rain,” his fall concert in October.

Lee is known for his sweet yet powerful voice. He also was a judge on the popular TV show “Superstar K” on cable channel Mnet.

“Carol Line” will kick off in Busan on Dec. 7 and continue through Dec. 31 in Daegu.

The Seoul concerts all start at 8 p.m.

Kim is well known for his smooth and clear voice that goes well with his sentimental lyrics. Most of his songs talk about love, especially love stories that end badly or that are doomed.

Kim is best known from his appearance last year on MBC’s hit program “Survival: I Am a Singer.”

Dec. 24 to 28: The folk-rock duo 10cm will present their very-first Christmas concert this year. 10cm became indie darlings in 2010 for their song “Americano.”

The songs on their second album, “2.0,” did even better, appearing on the music charts and turning the group into mainstream stars. They took their popularity up yet another level after appearing on the MBC’s entertainment program “Infinite Challenge.”

Dec. 31: Korea’s rising electro-dance sensation usher in the New Year and their new album with a big concert.

Friday to Jan. 26: A Korean production of the musical “Wicked” is presented in Korea for the first time. Adapted from the best-selling novel “Wicked: The Life and Times of the Wicked Witch of the West” by Gregory Maguire, the musical is an alterative view of L. Frank Baum’s famous story “The Wizard of Oz.”

Sunday to Dec. 22: The West End’s popular musical “Ghost” is presented in Korea for the first time. Adapted from the Hollywood movie of the same name, “Ghost” tells the undying love story of Molly and Sam.

“The Nutcracker” is a wonderful staple of ballet, along with “The Sleeping Beauty” and “Swan Lake,” thanks to the great combination of Tchaikovsky and ballet choreographer Marius Petipa.

Nov. 30: The dance-theater hybrid “Sensation,” created in the year 2000 in Amsterdam, the Netherlands, returns to Korea with the theme “Wicked Wonderland.”