Choongsung Presbyterian Church in Pangyo-dong, Gyeonggi, has been up for auction since July, but no one has made a bid yet. By Cho Yong-chul

On July 1 at the Seongnam branch of the Suwon District Court, south of Seoul, an interesting property made an appearance. Appraised at 52.6 billion won ($49 million), the property being auctioned was a modern office building, barely three years old, with seven stories above ground, five more below and 25,980 square meters (280,000 square feet) of space. It even had an auditorium that could seat 3,000.

But this wasn’t your typical office tower - it was a church. The Choongsung Presbyterian Church in Pangyo-dong, Gyeonggi, was the most valuable religious building ever to be put up for auction in Korea.

At the first auction, however, there were no bids. Its price was lowered 20 percent and auctioned again on Aug. 5, but still no takers.

Established in 1992 in a basement in Irwon-dong, southern Seoul, Choongsung Church had been considered a success story. It grew to 10,000 members and by March 2010 it was ready for the move into the big new building in Pangyo.

But the problems for Choongsung began to pile up. First, it could not sell its old building, which added to the church’s financial strains. Then, despite having a nice new building, it failed to grow as expected. Its loans, including 28.1 billion won to Suhyup Bank, became impossible to repay.

But Choongsung is hardly alone. Today, many churches find they have tried growing too much, too fast, and are facing insurmountable financial problems.

Until 2001, churches usually had a tough time securing loans. Houses of worship were not considered good collateral, so pastors often had to get loans in their own name or the church elders formed a corporate body that borrowed on behalf of the church.

But that changed dramatically in April 2001 when Nonghyup, looking to diversify its business, created the “Mission Loan,” specifically designed for churches. In just 10 months, there were 380 loan applications and 171.6 billion won was lent.

Soon after, other banks followed. Suhyup introduced the “Shalom Loan,” Woori had the “Siloam Loan” and Shinhan the “Plus Church Loan.” The reason for the change was that banks suddenly realized that churches tend to have plenty of cash flow.

“Unlike other loans, the crucial factor [in church loans] lay in the number and piety of church members, as well as the weekly offerings collections,” said Jang Byung-gu, a former bank manager at Suhyup.

An article in a business newspaper a few years ago noted that because “churches have devoted followers, the chance of delayed payments is low, and even if they are short one month, the interest will be paid back the next month when the offerings come in.” 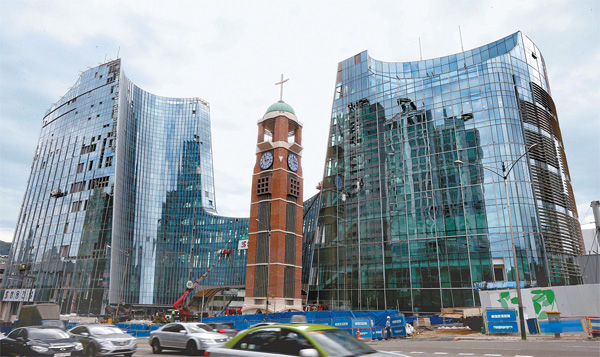 Sarang Community Church in Seocho District, southern Seoul, is one of many that have come under fire for moving into overly extravagant buildings.

In addition to the cash, banks assessed the faithfulness of parishioners and the morals and leadership skills of churches’ pastors.

For more than a decade, churches were regarded as a stable source of income for financial institutions, paying their interest on time. In 2007, one Nonghyup representative told a Christian media outlet that churches “were low risk because arrears are unlikely.”

“Even during a recession, the church will be fine,” he said. But he was wrong.

In the rush, many churches have overextended themselves.

“A lot of church buildings from newly developed cities are being put up for auction,” said Kim Ae-hee, a representative for the Christian Alliance for Church Reform.

One big problem these churches are having is that most of their loans are going to construction, often in parts of Korea that lack large Christian communities. 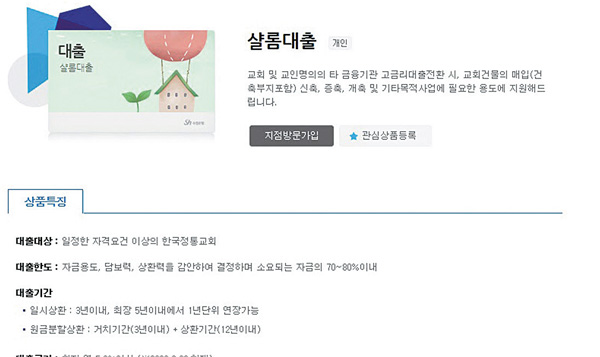 Many banks offer loan packages for churches, like the one seen here from Suhyup Bank. [JoongAng Ilbo]

Hwang Seung-young, chairman of the Christian Journalists Association of Korea, said that setting up a base in uncharted territory was big on many churches’ agendas. “There is this notion that you have to go and conquer new territory,” said Hwang.

Long ago when Gangnam became the center of Seoul’s development, the churches rushed in, and much of the same happened in Bundang and Ilsan, as is happening now in Sejong City. People equated church buildings with a propensity for growth. But that is no longer the case.
To pay off their mortgages, churches institute “building offerings” - envelopes dedicated to raising money for the new structures. But they also need more members, and many churchgoers feel burdened by the obligation.

“A lot of parishioners leave a church when it makes the decision to construct its own building,” said Hwang.

It often causes an uproar when a church takes to building a bigger, better sanctuary. In the last two years, one of the biggest churches in Seoul, Sarang Community Church, has come under attack for building a new church that connects directly to Seocho Station - such a prime location that many wonder how the church pulled it off.

Then there was the ethical dilemma over whether a church should be so materialistic in its building.

“It’s becoming impossible to carry on the cycle of building a new church, attract more followers and then pay back the loan,” said Hwang.

Rather than bringing people in, the new buildings drive people away.

“The burden to give not only affects parishioners financially, but also their faith,” said Bae Jong-suk, head of the Christian Management Review.

“There has been a significant decrease in the number of new Christians who are school-aged,” Hwang said. “Usually young believers take up a large portion of the church census, so this is a serious matter.”

Some banks are taking a stricter approach to lending to churches. After the economy and real estate market took a turn for the worse in 2009, Nonghyup toughened the requirements for loan applications. And rather than counting on churches’ cash flow, it started re-evaluating properties owned by the debtors.

“Normally we rely on regular income like tithes, but because of the recession this amount has decreased significantly,” said one bank assessor.

Banks are also pickier with collateral. For example, a church’s location is important in the bank’s decision.

The case of Choongsung Church illustrates this point.

“Choongsung Church is too big and located outside the city, which means there is less demand for it,” said Lee Young-jin, a representative at Godon Realty Partners.

He added that another problem is that, because of their design, religious buildings can almost only be bought by another religious organization or perhaps a company looking for a training facility. “Otherwise there is no use for such a building,” Lee said.

Of the properties by religious organizations that go to auction, churches make up 70 to 80 percent. But the chance anyone will want to buy them is just 15 to 19 percent.

“Religious facilities are hard to remodel and costly to upkeep,” said Lee. “Even if you snap it up for cheap, the cost that comes into altering the structure is substantial, which means that the most likely buyers are other religious organizations.”