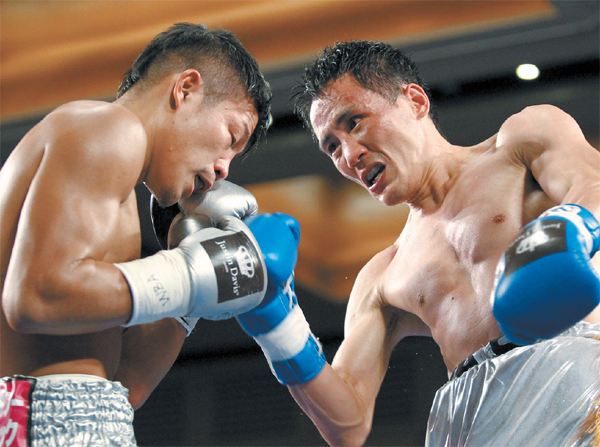 Although Son dominated the 12-round championship title match on Jeju Island, including knocking down Koki in the 10th round, the judges ruled in Koki’s favor. One judge scored the fight for Son, 116-113.5, but the other two scored the fight for Koki, 115-112 and 114.5-114. Son said the 2-1 decision was unfair and that he might file a complaint with the WBA.

Son entered the match with a record of 20 wins, 5 losses and 2 draws, with six knockouts. He made his professional boxing debut in 2000 but retired in 2007 as he had hard time earning a living. He returned to the ring in 2009 and earned the title match, the first in his 14-year career, as the world’s No. 14 boxer in the bantamweight class.

Koki entered the match with a record of 32 wins, 1 loss and 2 draws, with 17 knockouts. He is a boxing hero in Japan and has earned championship belts in three weight classes - light flyweight, flyweight and bantamweight. He became the bantamweight champ in 2010 and successfully defended his title seven times before the match against Son. But, as all those matches were held in Japan, some analysts have remarked that Koki is scared of fighting an away match.

Son struggled in the first round as Koki led off with several right jabs, but Son recovered in the fifth round by throwing straight punches at Koki’s face and belly, and also delivered a left hook to the Japanese competitor.

Son’s domination continued in the next rounds. Son never let the out-boxer away from his punching range, landing left jabs to his jaw several times. Koki, who was criticized for picking a relatively weak opponent, seemed embarrassed. He sometimes leaned his upper body away to avoid knockdowns.

But he fought like a champ. As Son got tired in the seventh and eighth rounds, Koki fought back with several left- and right-hand barrages.

In the ninth round, Son called up his last reserve of strength and aggressively flew at the Japanese. In the 10th, Son eventually knocked Koki down with a left hook to his face. Koki staggered slightly, then fell. It was his first time getting knocked down in the past seven years. After the 12th round ended, Son roared at the crowd and raised his arms as if victory was in the bag, but the three judges ruled in Koki’s favor. When the results were announced, the crowd booed.

“I feel like I had my champion belt stolen,” Son said after the match. “I’m considering filing a complaint about the ruling to the WBA and also want to have another match with Koki. I don’t care if the match is held in either Japan or Korea.”

“I couldn’t perform my boxing,” Koki was quoted as saying through Japan’s Daily Sports, which also said he had two scars over his eyes that he got during the match.