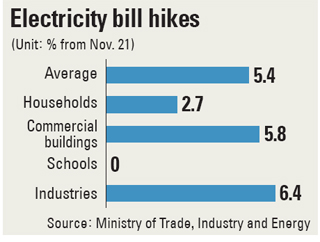 The government decided to raise electricity bills to curb increases in the nation’s power consumption, which it considers “excessive.”

The Ministry of Trade, Industry and Energy and the Ministry of Strategy and Finance announced yesterday a plan to raise power bills by an average of 5.4 percent in response to increasing demand for the country’s relatively cheap electricity amid worries about power shortages in the coming winters and summers.

Starting from Nov. 21, power bills for households will go up 2.7 percent, while bills for industries will climb 6.4 percent. For commercial buildings, the bills will jump 5.8 percent.

The power rate increases come after the country shut down three nuclear power plants in May due to fabrication of quality and testing certificates for parts and went through a summer in which power use had to be curbed to avoid blackouts. 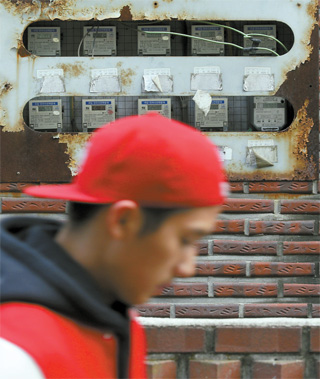 A young man passes a row of electric meters on a building in Gwanak District, southern Seoul, yesterday. Power bills are to be raised 5.4 percent. [NEWS1]

According to estimates by the Energy Ministry, bills for ordinary households that consume an average of 310 kilowatt-hours a month would rise about 1,300 won ($1.23).

The last power rate hikes were last January. The rate for households was raised by 2 percent and for industries by 4.4 percent. Increases for commercial buildings and factories will depend on what kind of businesses they operate and the amount of power they use, the ministry said.

A local restaurant using around 4,100 kilowatt-hours of power per month would be charged about 592,000 won, up roughly 5.2 percent. A department store using about 120,000 kilowatt-hours of electricity would have to pay around 21 million won, up 6.4 percent.

Vice Energy Minister Han Jin-hyun said the rate increase will help narrow the difference between the prices of electricity and kerosene on a global level.

The minister signaled there could be further increases given that the price difference between electricity and other energy sources remains wide despite yesterday’s measures.

“Since the differences between electricity and non-electricity sources like oil and gas have been distorted, there can be further adjustments in electricity prices through public consensus in the future.”

Han also said, “The country’s industrial power costs are still low compared to other countries.” After the hikes, the ministry expects a reduction of about 800,000 kilowatt-hour in annual power consumption.

The Finance Ministry, meanwhile, forecast consumer prices would inch up 0.056 percentage point due to the more expensive electricity bills. In October, Korea’s inflation rate hit a 14-year low, 0.7 percent year-on-year growth, according to the ministry.

It also decided to tax flaming coal, which is used to produce electricity. The coal was being used excessively because of its relatively cheap price compared to other sources. The tax rate for one kilogram (2.2 pounds) of flaming coal will be 30 won from July 1 next year.

Current tax rates for LNG and kerosene will be slashed by 30 percent.

The ministry estimates it can add about 830 billion won to the government’s tax revenues a year by adjusting the rates.

The Energy Ministry said it will hold Korea Hydro and Nuclear Power accountable for causing people to suffer power shortage problems by failing to operate nuclear power plants transparently. More than 8 percent of what was supposed to be produced by the corporation wasn’t produced due to the shutdowns, the ministry said.

Korea Electric Power Corporation, the state-run power distributor, is also being asked by the government to take some of the burden of the price hike. The company earlier announced its plan to cut costs and debt, which it called the strongest in its history.

The business community expressed immediate opposition to the hikes.

The Federation of Korean Industries yesterday released a statement that said the electricity increase would cost the nation’s industries dearly, which are responsible for economic growth.

The nation’s largest business lobbying organization said the power price for industrial use has soared 78 percent with 14 increases since 2000.

“This year alone, the electricity price for industries was hiked twice,” the statement said. “It will put a significant burden on the country’s mainstay industries like steelmaking and petrochemical manufacturing that consume much electricity and will affect the automobile and shipbuilding industries.”

“As costs mount, local steelmakers are suffering falling operating profits-to-sales ratios, and those running electric furnaces will be hit harder,” a statement by the steelmakers’ association said. “The government needs to provide tax incentives and R&D support to help maintain the competitiveness of the local steel industry.”

The Finance Ministry, in addition, expanded the number of low-income households eligible for financial support for energy bills this winter from the current 33,000 to 39,000. The aid will also be increased from 41.1 billion won to 59.6 billion won, an average of 1.5 million won per household.