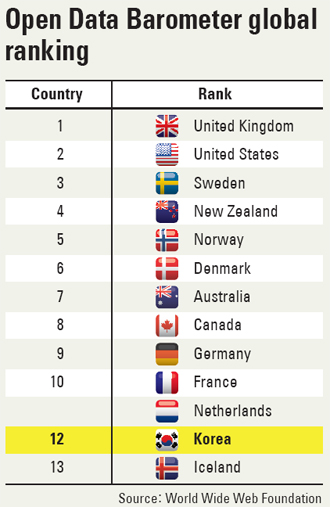 Korea lags behind some other advanced countries in the openness of data collected by the government, according to an England-based nonprofit organization.

A recent survey of 77 countries by the World Wide Web Foundation gave Korea 54.21 points out of 100 in its Open Data Barometer, which made it the 12th most transparent country among those surveyed.

It is the first time the organization, established by World Wide Web inventor Sir Tim Berners-Lee, conducted the survey. The scores, according to the organization, combine an assessment of the countries’ readiness regarding open data policy, as well as how well it implements the policy and how much of an impact it has on society.

Korea fared relatively well in readiness with 77.19 points, but it was given a mediocre 54.90 points and a meager 24.56 points in implementation and impact, respectively.

The United Kingdom received 100 points both in readiness and implementation while scoring 79.91 points in impact. They were 95.26 points, 86.67 points and 100 points each for the United States.

Korea is ranked the highest among Asian countries, with Japan following at 14th and Singapore at 29th, but the result is still disappointing for Korea, which topped a United Nations’ survey of the efficiency of e-governments.

The National Information Society Agency (NISA) under the Ministry of Science, ICT and Future Planning said the ranking did not properly reflect the policies to open state-managed data under the Park Geun-hye administration.

“Korea has put into place the full-fledged policies of raising transparency of public data under the Park Geun-hye administration and is now even allowing the commercialization of the public data,” said an official of the NISA.

The state-initiated law on activating the provision and usage of public data went into effect at the end of last month. Under the law, the Ministry of Security and Public Administration is planning to disclose 45 percent of the data currently owned by public entities, or 9,470 out of 21,000, by 2017.

Currently, the government has disclosed 3,395 documents, or 16 percent.