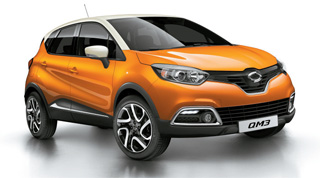 Renault Samsung Motors said yesterday the price of its new model QM3 will start from 22.5 million won ($21,300), heating up a price war in the compact sports utility vehicle segment.

The price is considered an aggressive marketing move by the automaker since the QM3, known as the Captur in Europe, is sold for around 21,100 euros ($28,500) there. The QM3 is an imported model from Spain, which means there are tariff and transportation costs.

RSM points out that the tariff rate is going down thanks to the Korea-EU Free Trade Agreement. Under the trade pact, passenger car tariffs from the EU to Korea will be lowered 1.4 percentage points to 2.6 percent from July.

“With my long experience in the automobile industry, I know why customers are interested in imported diesel models, and I’m confident we will succeed in the market,” said RSM Vice President Park Dong-hoon, a former CEO of Volkswagen Korea. “The price policy of QM3 shows how RSM will move in the market in the future, and we will influence the imported car industry when setting the price of our new cars.”

While the automaker has had only four models in its product lineup - the SM3, SM5, SM7 and QM5 - the QM3 was heralded as the model to turn around RSM’s sluggish sales.

RSM originally planned to release the QM3 next month in Korea, but because of its popularity in Europe, it postponed the official introduction to March.

The company, however, said that it secured 1,000 QM3s and these cars will be sold next month as a special sale before the official release. The reservation period for buying one of the 1,000 QM3s starts today.

In Korea, the QM3 is expected to compete with Hyundai Motor’s Tucson ix, Kia Motors’ Sportage R, Ssangyong Motor’s Korando C and GM Korea’s Chevrolet Trax. The prices of these models ranges from around 20 million won to 28 million won.

RSM said the QM3 is actually aimed at the market for small foreign diesel cars. Overseas, the Captur is competing with models like the Nissan Juke and Mini’s Countryman. But Park, who joined RSM in September as chief of sales, said the company is specifically aiming at the Volkswagen Golf, the popular hatchback that is luring Korean customers with its fuel efficiency and competitive price.

“The QM3 is an imported car and it can’t be compared to Korean cars,” Park said last week during a press meeting. “Before asking whether this car can find the [same] popularity here that it has in Europe, I want people to first drive this car to find out its advantages.”

RSM said the QM3 has competitiveness against small foreign cars selling for a minimum of 28 million won. In addition, the automaker emphasized that the QM3, equipped with a 1.5-liter diesel engine from Renault and dual clutch transmission from Germany’s Getrag, has a fuel efficiency of 18.5 kilometers per liter (43.5 miles per gallon).

RSM previously said that if the QM3 is a success, there is a possibility that it could move production to its Busan plant.