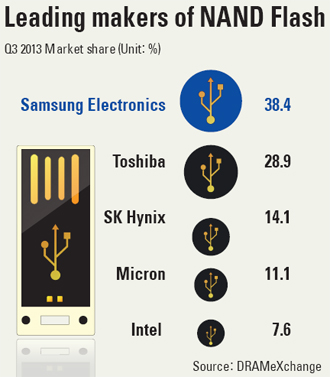 The company developed the 16-nanometer, 64GB multilevel cell NAND flash chip in the first half of the year.

The new version, which is 10 percent thinner, went into production last month, the company said yesterday, adding that production of the initial version of the chip began in June.

It is the first company in the world to mass produce the 16-nanometer 64G MLC NAND flash chip. Micron Semiconductor of the United States said it developed the chip in June.

The Korean company, which is the world’s second-largest company in the overall computer memory chip market, also said yesterday it has developed a 128GB MLC chip, the highest capacity so far. The company plans to start producing the chip next year.

“After developing and starting to mass produce the industry’s thinnest 16-nanometer product, we are now equipped with a high-density NAND flash product portfolio thanks to the development of the 16-nanometer 128GB MLC,” said Senior Vice President Kim Jin-woong, head of flash tech development at SK Hynix. “The company plans to actively respond to our customer demands with the NAND flash products, which are highly reliable and durable.”

Like DRAM flash memory, NAND flash memory is a data storage medium widely used in computers, smartphones and tablets. The two make up almost 95 percent of the world’s memory chip market, with DRAM recording $26.2 billion in revenue last year and NAND $23.5 billion, according to the market research agency Gartner.

SK Hynix posted sales of 4.08 trillion won ($3.86 billion) in the third quarter and an operating profit of 1.16 trillion won, both of which beat its record-setting second quarter.