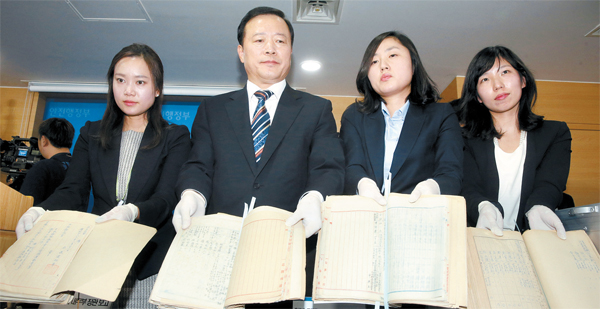 Park Kyung-kook, president of the National Archives of Korea, second from left, and his officials show some of the 67 sets of documents, including details of victims killed during and after the March 1 Independence Movement, that they found after a reconstruction of the Korean Embassy in Tokyo. [NEWS 1]


Dusty records discovered in Tokyo when the Korean Embassy was reconstructed last June shed new light on some of the horrors of Japanese imperial rule over Korea, including the number of Koreans killed in the 1919 March 1 Independence Movement and the number conscripted to work in Japan.

The contents of 67 sets of documents were revealed by the Ministry of Security and Public Administration and the National Archives yesterday after a first round of review.

One volume showed that 630 people were killed in the March 1 Movement in 1919, when Korean activists resisted the colonial occupation of Japan, which lasted from 1910 to 1945.

The previous official number was 391. There has been a lack of information in the past about people killed in the March 1 Movement.

The registry found in Tokyo not only bears the names of the victims but also ages, addresses and details of when they were killed and where they were buried.

Another volume documents information about 290 Koreans killed by the Japanese after the Great Kanto Earthquake of September 1923.

After the 7.9 earthquake that flattened Tokyo, rumors spread that Korean residents were looting and committing arson and Japanese vigilante groups comprised of both police and civilians killed up to thousands of Koreans. This volume has personal details about the victims.

The National Archives further revealed that 229,781 people were conscripted by Japan for labor and military services, listed in 65 volumes. Of these victims, around half came from the North and South Gyeongsang regions.

A 1957 government list said there were 285,771 people forced into labor by the Japanese, which is larger than the number in the Tokyo documents. A senior foreign affairs official said the newly discovered list has names not previously mentioned in the old list and birthdates and addresses, although neither can be considered complete or definitive.

The documents were discovered by the Korean mission in Tokyo when it returned to its newly reconstructed embassy building in June.

The ministry said it appears that the documents were the result of an order by the Syngman Rhee administration in December 1952 for the government to conduct surveys and do research in preparation for a second round of talks between Korea and Japan in April 1953.

“It is difficult to confirm at this moment whether they were actually used,” said Cho Tai-young, Ministry of Foreign Affairs spokesman.

The originals of the documents appear to have disappeared in Korea and the copies found at the embassy in Tokyo are the only existing copies known. They were sent to the Foreign Ministry in July and the National Archives in August.

National Archives President Park Kyung-kook said at the press conference yesterday that the new records can “provide a reference point to base compensation on and for further study.”