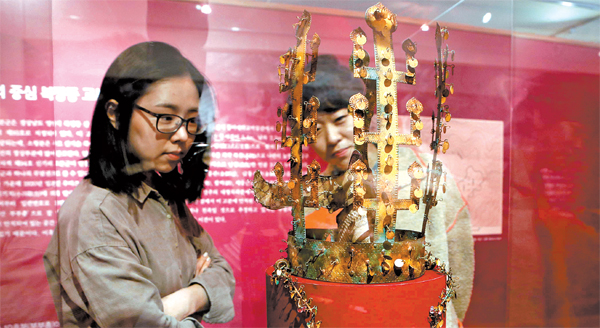 A gilded bronze crown from the Gaya era between the first and sixth centuries on display at Yangsan Museum in South Gyeongsang, on loan from Tokyo National Museum for three months since last month. The Korean government gave away 68 Gaya relics in a 1965 agreement with Japan. By Song Bong-geun

On Oct. 15, Yangsan Museum in South Gyeongsang opened an exhibit of 68 treasures from the Gaya period, the confederacy of territories in southern Korea between the first and sixth centuries. Locals were delighted to see the ancient artifacts, which were originally found in a tomb in the area.

They were stunned, however, to discover that the treasures were on temporary loan from Tokyo National Museum and that when the exhibit ended on Jan. 12 they would return to Japan - for good.

The museum’s visitor’s log is filled with messages questioning why Korea’s treasures had to be returned to Japan, the colonial master who spirited them away decades ago.

“It’s a sad situation that our relics cannot be kept,” read one. Yangsan Mayor Ryu Jeong-min wrote a message: “We want them all returned.”

The 1,500-year-old treasures, which include a gilt bronze crown, earrings and necklaces, were excavated nearly a century ago from the Yangsan Bubuchong Tomb, a mere 80 kilometers (49.7 miles) from the museum. Bubuchong means tomb of husband and wife, and historians are still unclear on the exact status of the people buried in that tomb.

Japan took the relics during their colonization of Korea, and they ended up in Tokyo National Museum. Legally it is their permanent home.

In the 1965 treaty between Korea and Japan that normalized diplomatic relations, the Park Chung Hee government ceded away rights to the national treasures.

At that time, the Korean government acknowledged that the Bubuchong artifacts were taken by the Japanese government during the colonial period.

“While these relics are important,” the Korean government said in the 1965 agreement, it signed away the artifacts “taking into consideration the strong wishes of the Tokyo National Museum to display them in a new Korean exhibit which is under construction in the East Asian wing and that we have superior relics” in Seoul, Gyeongju and other national museums.

In the 1965 treaty, Seoul requested 4,479 artifacts taken by Tokyo be returned. So far 1,432 have been returned. But the Bubuchong artifacts were not on that list.

Counting items that the Korean government did not ask to be returned, there are some 66,824 artifacts taken by Japan, according to Cultural Heritage Administration data.

A museum official said that because the relics were well preserved, they are at the national treasure level.

The Korean government only realized in 2004 that some artifacts were given away to Japan after documents from the 1965 Korea-Japan agreement were made public.

Shin Yong-cheol, head of Yangsan Museum, said he begged Tokyo National Museum for the right to “display the cultural assets that came from that region even for a short period of time.”

He admitted the legalities will make it difficult to have the Bubuchong relics returned. “But we plan to ask for a long-term loan, which is almost the same.”

A massive number of ancient Korean artifacts are scattered across the globe, at 152,915 items in 20 countries, with over 42,000 in the United States alone, according to the Cultural Heritage Administration.