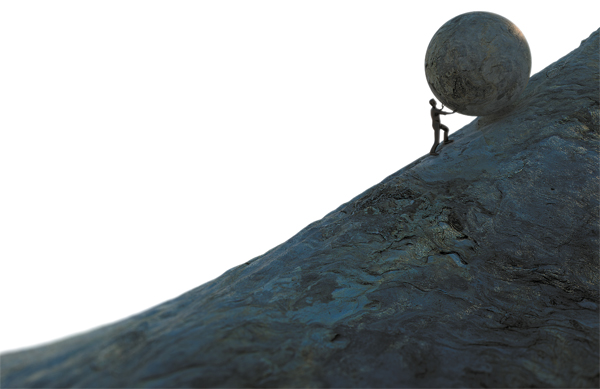 According to the Bank of Korea, household debt gained 12 trillion won from July through September to surpass 992 trillion won.

While overall household debt has been breaking records, the rate of growth has remained in the 5 percent range since the second quarter of 2012, when the government forced financial institutions to reduce their number of loans.

In the first quarter of 2011, debt grew 7 percent compared to the previous year.

The only time overall household debt retreated from the previous quarter was during January through March this year, when it fell from 968.3 trillion won to 963.1 trillion won.

Bank borrowing significantly dropped compared to the previous quarter. In the three months starting in July, loans from banks amounted to 2.1 trillion won year-on-year to total 472.7 trillion won. This is a sharp drop from the 8.3 trillion won increase from April through June.

In particular, mortgage loans significantly dropped in the July-September period to 1 trillion won, a stark contrast to 5.2 trillion won in the second quarter.

In contrast, borrowing from non-banking financial institutions, including credit unions and mutual savings banks, grew in the third quarter. These are loans with higher interest rates to people with low credit ratings and income who have limited access to bank credit. 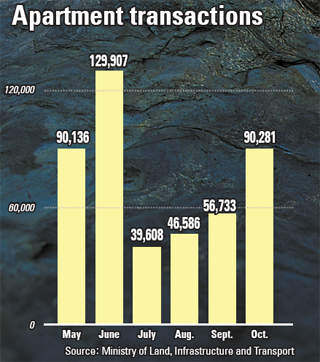 New mortgages from non-financial institutions in the third quarter amounted to 1.1 trillion won, twice the amount in the second quarter.

“As the government’s acquisition tax cut on housing purchases expired at the end of June, the number of mortgages decreased,” said a BOK official. “In contrast, borrowing from non-banking financial institutions increased, including college tuition loans for the fall semester.”

Experts say that with the housing market on a recovery course, it is clear that debt will easily surpass 1,000 trillion won by the end of the year.

After the ruling Saenuri Party decided to support the government’s plan to permanently lower the acquisition tax on housing purchases, the market quickly responded.

Last month, there were more than 90,000 apartment transactions. This was the largest number of transactions since June, the final month of the temporary tax cut.

The growth witnessed last month is expected to be more stable and sustainable compared to the temporary bump last year under the previous Lee Myung-bak administration.

Many experts, including Moody’s, have raised the exponentially large debt as a potential threat to the economy when the U.S. Federal Reserve starts scaling back its bond-buying stimulus and interest rates rise.

Although the government is aware of the situation, it has favored a passive approach.

The government is confident that Korea will recover to near 4 percent growth next year and the housing market will recover from its long slump.

Finance Minister Hyun Oh-seok earlier this month at a National Assembly hearing acknowledged the household debt problem and stressed that it could be solved by creating jobs and normalizing the housing market.

“The government is looking into various measures as household debt is one of Korea’s economic structural problems,” the finance minister told lawmakers. “But first, it is fundamentally important to create jobs [so that people can repay their debts], and since household debt is related to housing value, normalizing the housing market will help.”