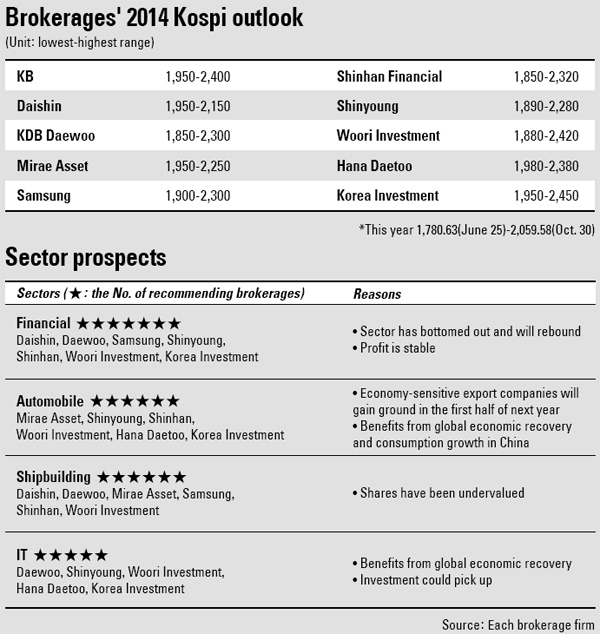 Although the Korean stock market has gone up and down lately with the benchmark Kospi falling below the 2,000 mark on Thursday, local securities firms’ outlook on stock-purchasing activity next year is rosy.

The issue of the U.S. Federal Reserve reducing its bond-buying program is expected to drag the Korean stock index down to 1,850 in the first and second quarters. However, a survey by the JoongAng Ilbo found that firms predict the Kospi will reach its record high of 2,229 in the latter part of the year as the global economy recovers.

The JoongAng Ilbo analyzed reports by 10 major securities firms on their outlook. According to the analysis, brokerages forecast that the global stock market in general will turn bullish in 2014 as the economies of advanced countries begin to recover and investors’ appetite for risk improves.

Of the 10 brokerages, eight proposed an outlook that the apex for the Kospi index next year will be between 2,300 and 2,400. Only two - Mirae Asset and Shinyoung - said the index will likely remain below 2,300.

Industry insiders note that securities firms tend to overestimate the performance of stocks. Late last year, for example, some firms forecast a Kospi index high point of more than 2,300 for 2013 and the high this year was 2,059.58 on Oct. 30.

However, what’s noticeable for next year is that securities firms have set the low point of their forecast higher than in previous years.

Last year, many brokerages predicted this year’s lowest level would be in the neighborhood of 1,700 and the Kospi sank to a 2013 low of 1,780.63 on June 25. However, no brokerage firm predicted a similar low for next year, with most estimating about 1,900.

“Although we will have issues like the tapering of the U.S. Fed’s quantitative easing program next year, the impact it will have on the global economy has already been exposed,” said Lee Chang-mok of Woori Investment and Securities. “The so-called China risk has also become moderate.”

Analysts predicted that next year, industrial shares such as chemical, steel, shipbuilding and machinery will gain ground.

While many brokerage firms agree the Kospi index will maintain momentum next year, there are differences of opinion as to how and when stocks will surge. Some say that through the first half of next year, stock prices will increase and then fall slightly. Others say the index will go up after tapering starts.

“We forecast that leading economic indicators that largely affect movements seen in the Kospi index will continue to recover in the first half of next year,” said Huh Jae-hwan, a researcher at Daewoo Securities. “After the index reaches its [peak], stock trading will remain moderate with less volatility.”

Chang Hee-jong, a researcher at Hana Daetoo Securities, echoed that view, saying the momentum of stock price increases will be strong in the first half of 2014.

“But that doesn’t necessarily mean that the stock flow will remain in the low level in the second half,” he said.

“The stock market will be mainly led by foreign investors in the first half of next year and with local funds flowing into securities, the index will hit 2,400,” said Cho Yoon-nam, head of research at Daishin Securities.