Expat women get a grip on self-defense

Expat women get a grip on self-defense 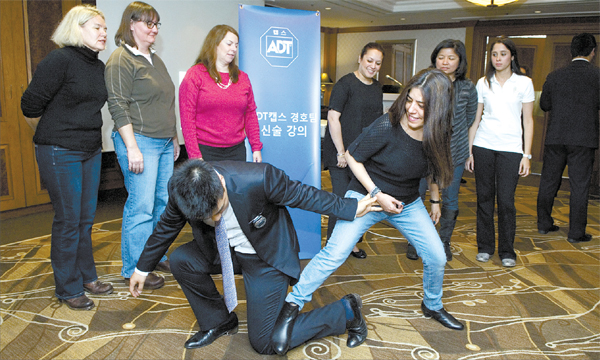 An ADT Caps bodyguard demonstrates self-defense skills to members of the American Women’s Club of Korea yesterday. Provided by the company

A man ended up flat on his back as he approached and tried to hug professional bodyguard Nam Hee-san during a demonstration event yesterday at the Millennium Seoul Hilton Hotel in central Seoul.

“If someone suspicious tries to hug you from the back, grab three fingers in the middle and with the other hand twist the pinky finger really hard,” Nam told a group of foreign women. “It hurts.”

He then went on to demonstrate what to do when being dragged from the side. “In this case, don’t kick,” Nam said. “Drive your high heels into the calves with your full body weight.”

About 20 expats from the American Women’s Club of Korea in sweatpants and sweaters followed the demonstration and grabbed one another’s arms in a hotel conference hall.

Although they giggled, the women found the lesson quite helpful. The self-defense class was organized by the U.S. security company ADT Caps.

The class was part of the company’s marketing efforts to maintain a strong relationship with American citizens and potential clients.

“ADT Caps is No. 2 in market share in Korean security industry. But we take pride in our personal bodyguard system as our unique strength,” said Kim Min-joo, a public relations manager at the company. S-1, a Samsung subsidiary, holds the largest pie in the market share, according to the industry sources.

“The session was very helpful, especially practicing with professional bodyguards really helped. We’ll practice them often with our husbands so we don’t forget,” said Urmila Sundaram, president of the club.

As a parting gift after the class, each lady took home pepper spray, foldable sticks and whistles.

“Unlike in the United States, where civilians can own a pistol, only police and soldiers are allowed to carry guns here in Korea,” said Nam. “So we use gas and Tasers,” turning on his own.