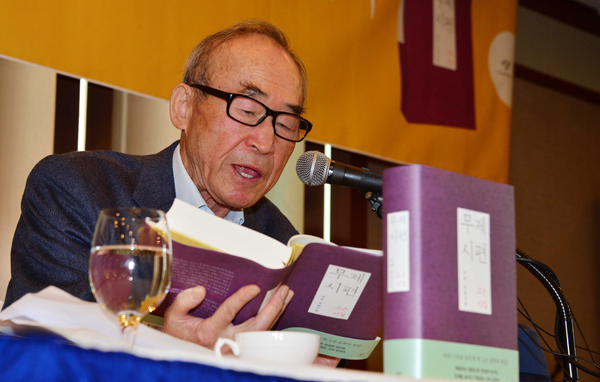 When asked whether he threw away any of his poems while compiling his new book, poet Ko Un answered: “Barely any. That is my flaw.” [NEWSIS]

Renowned Korean poet Ko Un has published yet another new book of poetry, this one titled “Untitled” and featuring 607 poems.

It’s the first book in two years for the incredibly prolific writer, following “Poems to Sanghwa: The Love of a Planet” and “Where Did My Periphery Go?” in 2011.

Ko says most of the new poems were written in the spring and summer, when he was averaging three to four poems a day.

“When it comes to poetry, there is no day or night,” said Ko at a press conference in the Korea Press Center on Monday. “Whether it is rainy, windy or sunny, all days are times for poetry.”

The newly published book consists of 539 untitled poems and an appendix of 68 additional poems. Ko said he left most of the new works untitled because he wanted to be free from the burden of naming. As soon as they are named, he said, they get trapped by that name.

“My poetry is the language of liberation,” he explained. “They are not statements that belong to some premise, ideology or name. They are meant to carve their own destinies.”

Just like Ko’s freewheeling attitude, his works are not afraid to roam around, transcending time and space.

“Every place in the universe is my hometown. I don’t call Earth or the solar system my hometown. It is somewhere in Andromeda,” said Ko.

His real life also transcends national borders. Earlier this year, Ko moved to the edge of Mount Gwanggyo in Anseong, south of Seoul in Gyeonggi, but his life is lived all over the world. He stayed in Venice this spring and crossed Siberia by train in the fall. The invitations from Europe and South America never seem to end. Even at the press conference, a film team from the BBC was on-hand, covering the poet.

“I really am a ‘road movie,’” said Ko. The 80-year-old poet said that, even as a child, his father would tell him to draw his home or village more, because he only drew things like trains, sailboats and birds. “I seek out the ocean, even at home, just like the fish-shaped wind chime that hangs under the eaves of a temple. That sense of irony lies within me.”

In contrast to his creative impulses, society doesn’t seem to pay much attention to poetry. But Ko said he is not sad that “the golden age” of poetry, from the early to late 20th century, has passed by, adding it is a blessing to be a poet in this era.

“It is not like ‘poetry is over,’ but I will revive it. This force indeed is where my best destiny begins,” said Ko.

The profile of Ko in his book was only two lines, just like the untitled book: “Ko Un. Fifty-five years as a poet. Wrote several collections of poems.”