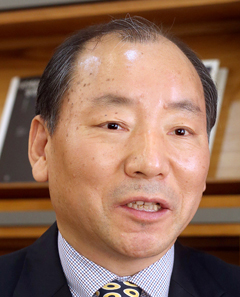 It was 2010 when Korean green tea was first introduced in Vienna, the capital of Austria, which is famous for its tea houses and its Vienna Coffee.

“In 2009, I read an article in a local newspaper that the owner of the famous tea room Haas & Haas in Vienna wanted to find Korean green tea but couldn’t,” said Baek Hwan-ki, who was working as a minister in the Korean embassy in the city.

“I’d run through the entire city of Vienna but couldn’t find any Korean green tea,” Baek recalls, “while those from Japan, China, India, Sri Lanka, Nepal and Taiwan were easy to find.”

The image of a Japanese woman on the ceiling of a store also inspired Baek to bring Korean tea to Austria. It was a painting of Michiko Tanaka, who brought Japanese tea to Austria.

“She was the woman who married Austrian entrepreneur Julius Meinl,” said Baek. “The tea store run by the Meinl family had a separate Japanese green tea corner with her painting on the ceiling spreading out like the Japanese rising sun flag. That’s when I made up my mind to bring Korean green tea to Austria.”

He went to Haas & Haas and explained about Korean green tea, and then contacted the best-known tea-producing county: Boseong in South Jeolla Province.

Baek asked whether it would be possible to export Korean green tea, and after a year, Bosung green tea was proudly presented in the Haas & Haas store in Stephan Plaza, the center of Vienna.

“It wasn’t an easy process,” said Baek. “I had to go through a lot of mediation and negotiations, and there were times when the deals almost fell apart. When I saw the green tea displayed with the sign ‘Korea’ on it, I was so emotionally touched.”

After three years as a minister, he came home and became a professor at the Parliamentary Training Office.

Baek gives lectures about negotiations and communication skills, along with ways to export Korean agricultural products. Baek started working in the Parliament after he came back from his military services. Only then did he get advanced education.

Baek recently published a book about his experiences in Vienna in the hopes that his stories about green tea would inspire others.